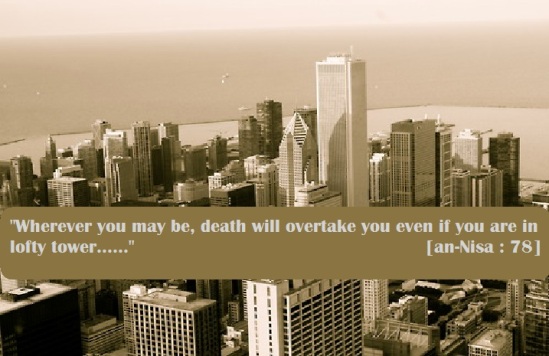 In ayah 78, Allah subhanahu wa ta’ala removes any doubts the deserters from qitaal [fighting] may entertain. They think that, perhaps by dodging qitaal, they can also dodge death. Therefore, it was said that there will be a day of death, a day when it must come, no matter where you are; it will come exactly where you are. When this is settled, there is no sense in backing out from qitaal.

“Wherever you may be, death will overtake you even if you are in lofty tower…”

meaning, you shall certainly die and none of you shall ever escape death. Allah subhanahu wa ta’ala reminds us of death through various ayaat of the Qur’an:

“And We granted not to any human being immortality before you.” [Al-Anbiya 21: 34]

Therefore, every soul shall taste death and nothing can save any person from it, whether he performed qitaal or not.

Everyone has an appointed time, and a limited term of life

In the illness that preceded his death, Khalid bin Waleed radhiAllahu ‘anhu said, while in his bed, “I participated in so and so number of battles, and every part of my body sustained an injury due to a stab or a shot. Yet here I am, I die in my bed! Let not the eyes of the cowards ever taste sleep.”

According to ibn Abbas radhiAllahu ‘anhu, the good here stands for fertile years and provision of fruits, production, children, etc. On the other hand, evil indicates the year of drought and famine, shortage of fruits and produce, death that strikes their children or animals and so forth. So while they used to attribute the blessings to Allah subhanahu wa ta’ala they would blame the Prophet salAllahu ‘alayhi wa sallam for trials and tribulations. They would say this is a bad omen because of their following the Prophet and embracing his religion.

Everything occurs by the decision and decree of Allah, and His decision shall come to pass for both the righteous and the wicked, the faithful and the disbelievers.

At the end of this ayah, He asks, “So what is (wrong) with these people that they do not seem to understand any statement?”

One thought on “There is No Escape From Death”