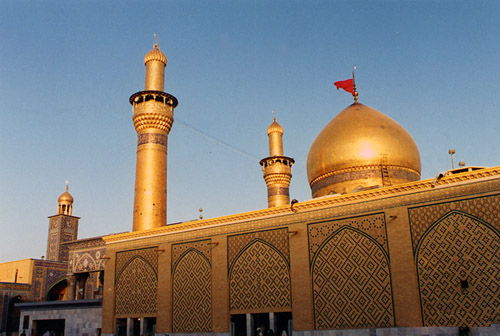 It was rumored that the squad had a clash with the enemy and suffered a defeat. The persons responsible for spreading this rumor were never identified. Upon hearing the rumor, the Kufi forces revolted against Hassan radhiAllahu `anhu and not only looted his camp but also manhandled him. He had to take refuge in Chosroes´ palace. But this incident shook the confidence of Hassan Ibn Ali radhiAllahu `anhu in his Kufi supporters; he therefore sent a word to Ameer Mu´awiya radhiAllahu `anhu for peace talks.

Ameer Mu´awiya radhiAllahu `anhu not only accepted the offer but also sent a blank cheque, so to say, for a settlement in accordance with the terms of Hassan radhiAllahu `anhu, who laid down the following conditions:

Banu Hashim shall be preferred in the distribution of allowances and grants. A general amnesty shall be declared for all who took part in the battle.

Ameer Mu´awiya radhiAllahu `anhu accepted all these terms and peace was restored in the sprawling empire. Strife and civil war came to an end and the state was unified under one central authority as he forced allegiance from all the dissidents. Hassan radhiAllahi `anhu commenting on the transfer of authority, said, “If Mu´awiya was the rightful successor to the Caliphate, he has received it and if I had that right, I, too, have passed it on to him; so the matter ends there.”

This was in accordance with the prophecy of the Prophet sallAllahu `aalyhi wa sallam about Hassan radhiAllahu `anhu when he had said,

“Through my son Hassan, Allah will bring about peace between two warring factions of Muslims.”

It was an honor bestowed on Hassan radhiAllahu `anhu by Allah subhanahu wa ta`ala but the Sabayees were highly indignant at his peace move. They called him names and taunted him with the words “Ya Aar Al-Momineen” (O, Shame for the believers!) and “Ya Mozill Al-Momineen” (You, the debaser of the Believers!). Ostensibly they were his supporters, but in fact, expressed their utter resentment at his action for peace making which ushered in an era of twenty years of unity and tranquility in the Muslim empire.

Muslims belonging to Ahl Al-Sunnah Wal-Jama´ah (the Sunni sect of Islam) do not include Ameer Mu´awiya´s reign in Al-Khilafah Al-Rashidah (the period of Rightly Guided Caliphate). But Ameer Mu´awiya´s twenty years reign is still considered to be the best period in the entire Muslim history after Al-Khilafah Al-Rashidah, because during his reign all the functions of a Muslim state:

– maintenance of peace,
– dispensation of justice,
– struggle for the supremacy of Islam,
– dissemination of the Word of Allah