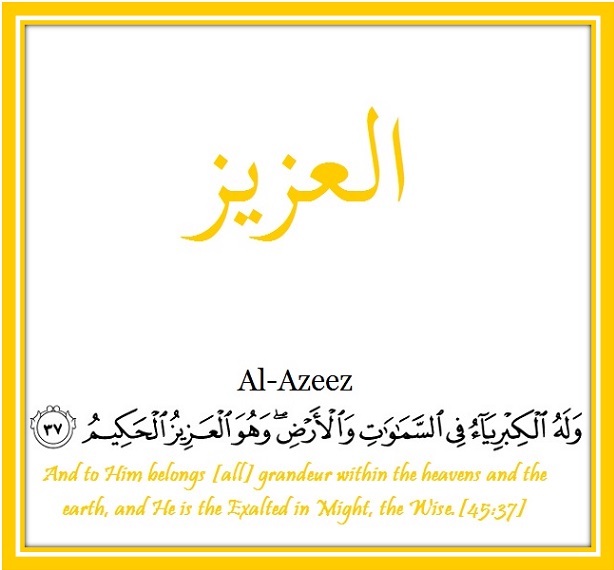 The word Azeez has the following classing Arabic connotations:

– to be mighty, potent, strong, powerful
– to be high, elevated, noble, exalted
– to be honorable, noble, glorious, illustrious
– to be indomitable, invincible
– to be respected, cherished, dear
– to be scarce, rare, precious, unattainable

In the Qur’an this name appears ninety-two times. This in itself tells us that we need to remind ourselves again and again that Allah subhanahu wa ta’ala is All-Mighty and All-Powerful. We can never go against His Will. In Surah al-Jathiya Ayah 37 Allah subhanahu wa ta`ala says,

The Qur’an is also Called `Azeez

✦ Al-Azeez is the One Who overpowers and is never overpowered. If a person is overpowered, he is by no means `azeez (mighty or honorable) but rather weak and humble. The one who overpowers him is likely to over-humiliate him. Allah subhanahu wa ta`ala says in Surah Yusuf Ayah 21 says, “And Allah has full power and control over His Affairs, but most of men know not.”  This name belongs to names of “As-Sifat” (Names that are Attributes of Allah).

✦ Al-Azeez is the Mighty and forceful, as derived from the Arabic word “Azza”, which means “reinforces and makes stronger”. Allah subhanahu wa ta`ala says, “When We sent to them two but they denied them, so We ‘Azzazna’ [reinforced or strengthened] them with a third, and they said, ‘Indeed, we are messengers to you.’” [Surah Yaseen 36: 14] This meaning also belongs to names of As-Sifat.

✦ Allah alone is Al-Azeez because existence and survival of all things depend on Him. In other words, no one, except Allah alone, is needed by all things for all things. Allah subhanahu wa ta`ala says in Surah Aal Imran Ayah 2, “Allah: there is no god but Him, the Ever Living, the One Who sustains and protects all that exists.”

1. Have faith in The Almighty. He is unbeatable. He is Mighty. Having faith in this Name gives us courage because we know our Lord cannot be prevented from fulfilling what He wills. Whatever He wills happens, even if the people will otherwise, and whatever He wills not will not happen, even if the people will it. So we should only work to seek His pleasure and be confident He will help us. He has power over all things. We should accept whatever happens to us and show sabr and shukr.

2. There’s no hiding from Al-Azeez. When Yunus `alayhi salaam left the city without an order coming from Allah, he was swallowed up by a whale. The story taught us that even a Prophet of Allah was not free from accountability. No matter how good a Muslim we are or how pious we are, Allah subhanahu wa ta`ala is Al-Azeez. We can never hide from His presence.

3. Al-Azeez grants power and honor.  We should remember that our `izzah is in Islam if we chase anything other than Islam we will never be successful. Success doesn’t lie in wealth, status or looks. We should obey Allah subhanahu wa ta`ala and follow the path of His Messenger sallAllahu `alayhi wa sallam. Allah subhanahu wa ta`ala said in Surah an-Nisa Ayah 139, “Those who take disbelievers for Auliya (protectors or helpers or friends) instead of believers, do they seek honor, power and glory with them?”

4. Don’t misuse the power. When Allah subhanahu wa ta`ala grants us an authoritative position whether as a parent or an elder sibling we should not misuse this power or turn into a tyrant. True power is when we are able to restrain ourselves in times of anger, when we have the strength to resist desires and withstand temptations, and when we struggle in the path of Allah.

5. Use the Qur’an, al-azeez. Allah subhanahu wa ta’ala called the Quran `azeez because it is His speech. This means the Qur’an contains everything which we need to know to succeed in life, because it comes from our Creator. It is our manual. Why is a manual read? So that take benefit from it and use a thing as it should be used. We can only make the best use of our life when we consider Qur’an its manual and seek guidance through it.

2 thoughts on “Al-Azeez – the Mighty, the Powerful”