In the previous Ayah we learned this world is a place of trial. Good deeds are tied up to effort. This is a way laid out with hurdles. The same is true about evil deeds. They come with a web of deception laced with unending desires and their short-lived gratifications, a way of living which makes these evil deeds look good in the sight of human beings who are unaware of their reality and heedless to their ultimate end. Such is their pull that the smartest of the smart in this world would not hesitate to jump into the bandwagon.

This trial can be seen as an ongoing spectacle of life. Usually, it is the big people of a community, the rich, the influential, the holders of clout and access who, when they get used to the taste of money, power and recognition, start committing crimes in one or the other form, never bothering to reflect on the ultimate end of what they were doing. The common people become accustomed to following the example set by these big people. They copy them with the conviction that it is good for them and that they are on the obvious road to success. In contrast, there are the blessed prophets and their deputies charged with learning, teaching and preaching. They try to stop people from their evil deeds and warn them of the consequences of what they were doing.

Then, these big people open a front of hostility and conspiracy against them, which is obviously to harass or harm these pious souls, but in the ultimate analysis, the curse of what they do against them recoils back on them alone. And this can happen to them even within their life in the present world.

In these Ayaat, Muslims have been warned against aspiring to be like the big, the rich, the wealthy of the world. They should leave the habit of looking at them as role-models and stop following them mob-like. For them, the ideal is that they should make a habit of seeing everything in perspective making sure that they are aware of the final end of their deeds, and that they should themselves learn to figure out as to what is good or bad for them. 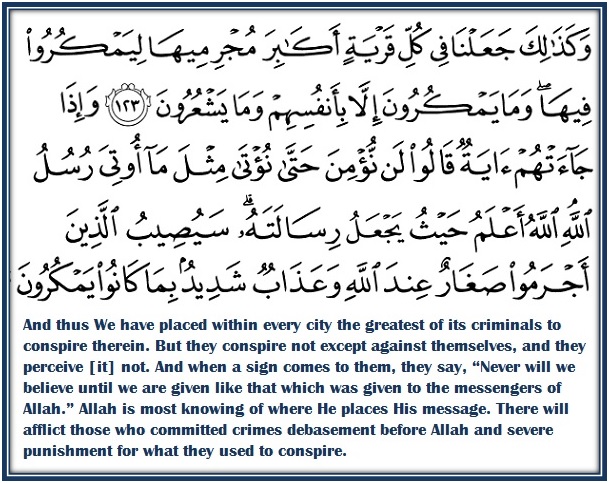 The word akabira [أَكَـبِرَ] is the plural of akbar meaning “the greatest”. One can be great in any regard such as the wealth, status or lineage. In the Ayah, this word has been used to refer to the elite.

In every community there are people who are the greatest of criminals. They plot and plan against the Prophets, and those who are on Haq [truth]. In the early days of Islam we saw that the rich and wealthy, those who had status and authority oppressed everyone who accepted Islam. They would beat the new Muslims to death.

In the Ayah, Allah subhanahu wa ta`ala is comforting His Messenger sallAllahu `alayhi wa sallam that just as He appointed chiefs and leaders for the criminals calling to disbelief, hindering from the path of Allah, opposing and defying the Messenger such was also the case with Messengers before him. As Allah subhanahu wa ta`ala says in Surah al-Furqan Ayah 31, “And thus have We made for every prophet an enemy from among the criminals. But sufficient is your Lord as a guide and a helper.” Therefore, the Prophet should not grieve about the hostility of the chiefs of Quraysh as it is nothing new. Opposition was faced by other Messengers too but in the end the oppressors were the one who faced disgrace and humiliation, and the word of Allah reigned supreme.

Explaining “…the greatest of its criminals to conspire therein…” Ibn `Abbas radhiAllahi `anhu said leadership is given to the wicked ones and they commit evil in it. When they do this, they are destroyed with Allah’s torment. In every nation the elite were made the greatest of criminals. As we see in the time of Prophet Musa `alayhi salaam and Prophet Muhammad sallAllahu `alayhi wa sallam and how they were destroyed in the end.

The statement “…But they conspire not except against themselves, and they perceive [it] not,” means that the harm of their wicked plots as well as misguiding those whom they lead astray, will only strike them. As Allah subhanahu wa ta`ala says in Surah al-Ankaboot Ayah 13, “But they will surely carry their [own] burdens and [other] burdens along with their burdens,” and in Surah an-Nahl Ayah 25, “And also of the burdens of those whom they misled without knowledge. Evil indeed is that which they shall bear.”

In Ayah 124, we again read about the Quraysh’s demand for miracles and signs. This time they demand that if Muhammad [sallAllahu `alayhi wa sallam] has been given the Book, we too should be given some sort of revelation. If he has been chosen as the Messenger, we too should be chosen as one. Allah subhanahu wa ta`ala replies to their belligerence by saying, “…Allah is most knowing of where He places His message.”

Allah knows best with whom His message should be given and which of His creatures are suitable for it. In Surah az-Zukhruf Ayaat 31 it was said, “And they said, ‘Why was this Qur’an not sent down upon a great man from [one of] the two cities?’” Allah subhanahu wa ta`ala respond to their criticism in the next Ayah, “Do they distribute the mercy of your Lord?”

The unbelievers mocked and criticized Prophet Muhammad’s Prophethood although they admitted to his virtue, honorable lineage, respectable ancestry and purity of household and upbringing. They used to call him “Sadiq” and “Al-Amin” – the truthful, before the revelations began. Prior to accepting Islam when Abu Sufyan was asked by Heraclius, “How honorable is his (the Prophet’s) ancestral lineage?” Abu Sufyan answered, “His ancestry is highly regarded among us.” Heraclius asked, “Do you find that he lied, before he started his mission?” Abu Sufyan replied, “No.” The emperor of Rome relied on the honor and purity of the Prophet to recognize the truth of his Prophethood and what he came with.

“I was chosen from a succession of the best generations of the Children of Adam, until the generation I was sent in.”

Allah subhanahu wa ta`ala says next, “…debasement before Allah and severe punishment for what they used to conspire.” This is a stern threat and sure promise from Allah for those who arrogantly refrain from obeying His Messengers and adhering to what they came with. On the Day of Resurrection, they will suffer humiliation and eternal disgrace before Allah subhanahu wa ta`ala because they were arrogant in the worldly life. “Indeed, those who disdain My worship will enter Hell [rendered] contemptible.” [Surah Ghaffir : 60]

– A person who plots evil plans is in reality only harming himself.

– A person should neither object to the decree of Allah nor be arrogant in accepting someone else’s superiority. Sometimes it so happens that when Allah subhanahu wa ta`ala honors someone with something that we cannot accept it. We mock, criticize and object. Allah is Aleem. Will He not know who deserves what? Then what’s the point in being jealous or arrogance? Our being jealous or arrogant is not going to change anything, whether it is wealth, status, authority, job promotion, knowledge, marriage, children or any other blessing. Behind every decision of Allah there is wisdom and we should simply accept it.

– Blessings do not only apply to material things as we have learned that sometimes Allah increases people in wealth and other material good so that they may increase in their transgression. Material things are not a criterion to judge someone’s superiority. Knowledge of the Deen is the great blessing. Therefore if Allah chooses someone for His Deen and gives him knowledge then there is a reason behind it. Perhaps that person has the ability or special quality that you don’t have. Allah knows and we know not.

Instead of pointing fingers at others we should look at ourselves. Perhaps in the Sight of Allah we don’t deserve what the other person has been given. We need to check ourselves instead of opposing Allah’s decree.

– When a person doesn’t accept Allah’s decree or displays arrogance against people chosen by Allah, such a person is humiliated and disgraced.