The Surah discuses two themes: first that man after his death has to appear before Allah subhanahu wa ta`ala; second, that the Qur’an is a decisive Word which no plan or device of the disbelievers can defeat or frustrate.

First of all, the stars of the heavens have been cited as evidence that there is nothing in the universe which may continue to exist and survive without guardian over it. Then man has been asked to consider his own self as to how he has been brought into existence from a drop and shaped into a living human being. The One Who has so brought him into existence, has certainly the power to create him once again, and this resurrection will be for the purpose to subject to scrutiny all the secrets of man which remained hidden in the world. At that time, man will neither be able to escape the consequences of his deeds by his own power, nor will anyone else come to his rescue.

In conclusion, it has been pointed out that just as the falling of rain from the sky and the sprouting of plants and crops from the earth is no child’s play but a serious task, so also the truths expressed in the Qur’an are no jest but a firm and unchangeable reality. The disbelievers are involved in the misunderstanding that their plans and devices will defeat the invitation of the Qur’an, but they do not know that Allah subhanahu wa ta`ala too is devising a plan which will bring to naught all their scheming and planning. Then in one sentence the discourse has been summed up, with a word of consolation to the Prophet salAllahu ‘alayhi wa sallam and a tacit warning to the disbelievers, saying: have patience for a while, let the disbelievers do their worst. Before long they will themselves realize whether they have been able to defeat the Qur’an by their scheming or the Qur’an has dominated them in the very place where they are exerting their utmost to defeat it.

Once Mu’adh radhiAllahu ‘anhu lead the Maghrib prayer and he recited al-Baqarah and an-Nisa’. When the Prophet salAllahu ‘alayhi wa sallam found out he said,

“Are you putting the people to trial O Mu’adh! Was it not sufficient for you to recite As-Sama’i wat-Tariq, and Ash-Shamsi wa Duhaha, and something like them?” [An-Nasai’]

Allah subhanahu wa ta`ala opens the Surah by swearing by the heavens and what He has placed in it of radiant stars. This is followed by an expression of exclamation witnessed repeatedly in the Qur’an, “And what can make you know what the night visitor is?” [86:2]. Here we get an impression that the night visitor is mysterious. “It is the piercing star,” its powerful, penetrating rays travel at speed through the surrounding darkness. Qatadah explained that this star is only seen at night and it is hidden during the day.

After swearing by heaven and its piercing stars Allah subhanahu wa ta`ala says, “There is no soul but that is has over it a protector,” [86:4] meaning every soul has a guardian over it from Allah that protects it from the calamities. Something similar was also said in Surah Ar-R’ad Ayah 11, “For each one are successive [angels] before and behind him who protect him by the decree of Allah.” This implies a strong assertion that there is an agent appointed by Allah subhanahu wa ta`ala to watch over every soul and keep a record of its actions and thoughts. People are not left to roam about the earth as they wish.

On the contrary, an accurate and immediate record is kept, on the basis of which reckoning will be made. This inference becomes clear as the soul feels that it is never alone even when without company. There is always the watcher who remains nearby even when one hides from all and is secure against any visitor or intruder. There is still the watcher who penetrates all covers and has access to all things concealed, in the same way as the piercing star tears through the night cover.

Allah subhanahu wa ta`ala then calls our attention towards the early stages of man’s creation, “So let man observe from what he was created,” [86:5]. Let man consider his origins and what has become of him. Who is it Who has been monitoring man’s development from conception till death? Who is it Who has been protecting man from diseases, accidents and calamities and providing him with countless means of life and opportunities for survival in the world? Is it all happening on its own?

The One Who so artistically designed man’s structure and taught each body cell its respective function is capable of resurrecting man for the Final Judgment. The resurrection has been mentioned here because the idolators denied this final reckoning. Will someone who knows I’ll never be evaluated give his best to whatever he is doing? If there is course exam and we know we won’t be graded on it how much and how will we study?

“The Day when secrets will be put on trial, then man will have no power or any helper,” [86:9-10], meaning, on the Day of Judgment the secrets will be exposed and made manifest. Thus, that which is concealed will be well known. It is confirmed in the two Saheehs on the authority of Ibn ‘Umar radhiAllahu ‘anhu that the Messenger of Allah salAllahu ‘alayhi wa sallam said, “Every betrayer will have a flag raised for him behind his back, and it will be said, ‘This is the betrayal of so-and-so, the son of so-and-so.’”

What man does is evident to the people but the intentions, aims and secret motives working behind them remained hidden from the people. On the Resurrection Day all this will be laid bare and not only will the acts and deeds of every person be examined but it will also be seen what was his motive and intention and object of so acting. Likewise, it also remained hidden from the world, even from the doer of the act himself, what effects and influences of his act appeared in the world, to what extent they spread and for how long they continued to work. This secret too will be revealed on the Resurrection Day and it will be fully examined as to what were the consequences of the seed that a person sowed in the world, what fruit it bore and for how long it affected the later generations for better or for worse.

Man shall be helpless, with no supporter. Standing bare without cover and strength adds to the strains and hardships of the situation. This has a deep effect on the reader’s perception, as it moves from talking of the universe and the human soul to man’s creation and his remarkable journey, until he reaches the end when his secrets are exposed and he stands alone, powerless, without support.

Ayaat 11-17 – Qur’an is a Decisive Statement not Amusement 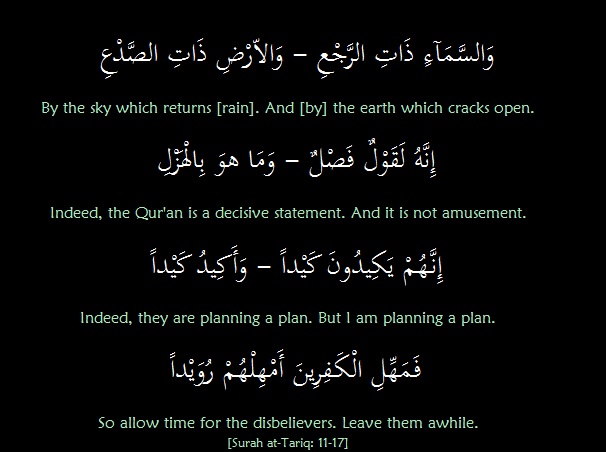 Ibn ‘Abbas radhiAllahu ‘anhu explains the word “Ar-raj’i” as rain. Raj’i literally means “to return” like we say in the statement inna lilahi wa inna ilahe rajeoun. In the context, it has been used metaphorically because rain does not fall just once but returns over and over again in the season as well as off season. Qatadah added, “It returns the sustenance of the servants (creatures) every year. Were it not for this, they would all be destroyed and so would their cattle.”

The rain which comes from the sky again and again and the vegetation which splits the earth and springs forth are two images describing one of the many manifestations of life, the life of plants and their origins.

The image of rain and verdure is not dissimilar to that of the night visitor, the piercing star as it splits covers and curtains. It is also similar to the scene depicting souls being searched and all that is concealed being thrown open. It is again the same sort of structure which tells of the Maker. Allah subhanahu wa ta`ala swears by these two creations and their two events, the returning rains and the earth splitting to bring out vegetation. The impact of the scene portrayed combines with the rhythm to strike a strong note of finality and decisiveness.

The oath is that this word, or the Qur’an, which states that people will return to life so as to face a trial, is the decisive word which admits of no frivolity. “Indeed, the Qur’an is a decisive statement. And it is not amusement,” [86:13-14]. Just as the falling of rain from the sky and the splitting of the earth is not jest but a serious reality, so is the news which the Qur’an gives that man has to return to his Creator. It is not an amusing statement but a definite and decisive reality; an unchangeable truth which has to be fulfilled. It puts an end to all arguments, doubts and uncertainties.

When this final statement of return and trial is made, there follows an address to the Messenger salAllahu ‘alayhi wa sallam. At the time of revelation he had only a few believers who supported him in Makkah. They were suffering the brunt of the idolaters’ hostility and their plots against the Islamic message. The idolaters were tirelessly trying to smother the call. The address is made to the Prophet so as to encourage and reassure him, and to disparage what the schemers devise. It states that their scheming is only temporary; the battle is in Allah’s hands and under His command. So, let the Prophet persevere and be patient, and let him and the believers be reassured, “Indeed, they are planning a plan. But I am planning a plan,” [86: 15-16].

The One Who created man from a drop and then guided, preserved and direction him without any strength, ability or will of his own; the One Who made the sky, the night visitor; the One Who sends rainfall from above and splits the earth for vegetation is All-Powerful over the enemies of the Prophet and the believers. If the disbelievers are making a plan to defeat the Prophet then Allah subhanahu wa ta`ala is devising a plan of His own. So, do not be impatient. “… allow time for the disbelievers. Leave them awhile,” [86:17]. There is wisdom behind this respite and delay which is short even though it may take up the whole length of this first life; for how short this life appears when compared with a life of limitless duration?

Allah’s benevolent and compassionate attitude towards His Messenger is noticeable here. It is Divine kindness which suggests Allah subhanahu wa ta`ala is not unaware of what’s happening to him and has not left him alone.

“And upon Allah let the believers rely.” [Surah Ibraheem:11]