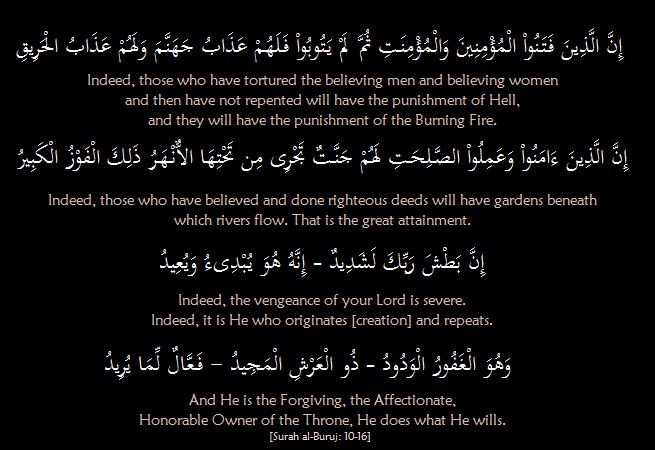 “Indeed, those who have tortured the believing men and believing women and then have not repented will have the punishment of Hell, and they will have the punishment of the Burning Fire.” What happens on earth in this first life is not the end of the story. There remains an inevitable part which will follow later. There remains the allocation of awards, which will restore the balance of justice and provide the final settlement of what took place between the believers and the tyrants. That it will come is certain and confirmed by Allah subhanahu wa ta`ala.

“Indeed, those who have believed and done righteous deeds will have gardens beneath which rivers flow. That is the great attainment.” Paradise symbolizes Allah’s pleasure with righteous believers and His reward to them. The Arabic term, fawz, used here for triumph also connotes escape and success. Escaping the punishment of the Hereafter is the real success. Whatever trials you are going through because of your belief in Allah subhanahu wa ta’ala will pass, the Hereafter is where you are going to remain forever and that should remain your main focus.

Allah subhanahu wa ta’ala then says, “Indeed, the vengeance of your Lord is severe.” This comment suitably contrasts Allah’s punishment with the vengeance of the tyrants that they consider to be powerful. The real power is that leveled by the Almighty not that leveled by insignificant people who impose their rule over a limited piece of land for a limited period of time over weak people. This statement also serves as an assurance for the believers who have believed in One Allah and are afflicted because of their belief. Allah’s punishment and vengeance upon His enemies, who have rejected His messengers, and opposed His command, is severe, great and strong. For verily, He is the Owner of power. He is the One that whatever He wants, then it will be however He wants it to be.

But those who humble themselves and repent, for them, “He is the Forgiving, the Affectionate.” Hasan Al-Basri said, “Look at this generosity and kindness. These people killed Allah’s Awliya’ and He still invites them to make repentance and seek forgiveness.”

Forgiveness is part of Allah’s mercy and grace which have no limits or restrictions. It is an open door which is never closed no matter how grave a sin is. How much do people endure for the sake of another person’s love? They bear all kinds of hardships and afflictions without uttering a word of complaint. Imagine, how it would be if man displayed the same level of patience in being tested for the sake of Allah subhanahu wa ta’ala  whether that meant fighting other people or one’s own nafs. Imagine the elevated status of this person elevated in Allah’s Sight because of his love for Allah.

How insignificant the sacrifices of this transitory life would seem if man realized the love and compassion that Allah subhanahu wa ta’ala has for His righteous servants. So petty becomes life, so paltry becomes all suffering, and so trifling becomes every treasured object when the pleasure of the loving Lord of the Throne is at stake.

A crucial point to remember is that His will is absolute. He may choose, on a certain occasion, that believers should, by His grace, win victory for a specific purpose He wants to accomplish. He may choose, on other occasions, that faith should triumph over persecution and trial. This may be manifested, at times, through the physical elimination of believers from this transitory life, again to accomplish a specific purpose. He may decide to smite tyrants in this life, or to delay their punishment to the promised day. Either course of action fulfills a certain purpose behind which divine wisdom lies. Any action He performs is part of His well-defined scheme and His ability to do what He wills. And as believing servants we should not question His will.

Ayaat 17-22- Those who Disbelieve are in Persistent Denial

“Has there reached you the story of the soldiers – [Those of] Pharaoh and Thamud?” This is a reference to two long stories well-known to the addressees as they have been mentioned several times in the Qur’an. The two nations concerned are described here by the term “the hosts” in reference to their might and equipment. Have you heard their stories and how Allah subhanahu wa ta’ala dealt with them?

Theirs were two stories, different in nature and consequence. Pharaoh and his army were eliminated when the Children of Israel were saved by Allah subhanahu wa ta’ala. He gave them power to rule for a certain period in order to accomplish a certain scheme. As for the Thamud, Allah subhanahu wa ta’ala exterminated them and saved His prophet, Şalih, along with his few followers. The believers in this instance did not establish a state of their own; they were merely saved from corrupt enemies.

Both stories are manifestations of the divine will. They provide two examples of what may befall advocates of the Islamic faith. They are mentioned along with a third possibility which distinguishes the pit event. The Qur’an explains all three eventualities to the believers in Makkah and to all generations of believers.

The Surah concludes with two statements of fact and a final verdict: “But they who disbelieve are in (persistent) denial. While Allah encompasses them from behind.” The truth about the disbelievers is that they are in a constant state of disbelief, uttering lies morning and evening, but Allah subhanahu wa ta’ala surrounds them all. They are unaware that Allah’s might and His knowledge engulf them.

“But this is an honored Qur’an.” The term honored signifies nobility and sublimity. Indeed, there is nothing nobler or more glorious than Allah’s word. It is inscribed on an imperishable tablet, the nature of which we cannot comprehend because it is part of the knowledge Allah subhanahu wa ta’ala has reserved for Himself. We benefit, however, from the connotations of the statement and the impression it leaves that the Qur’an is well-preserved and well-guarded. It is the final word in every matter it deals with.