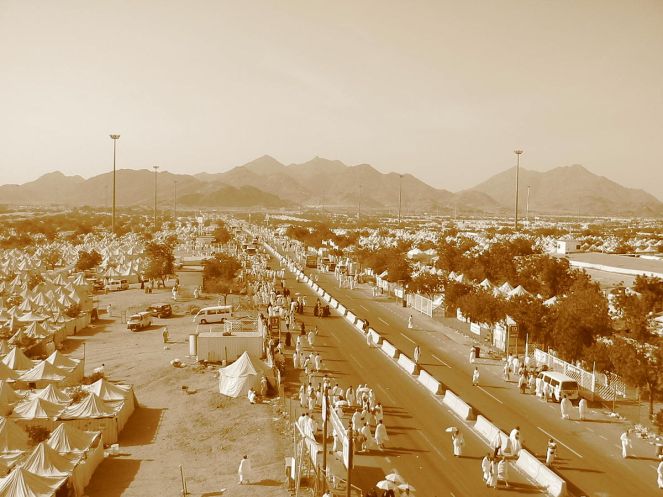 Then when he enters al-Masjid al-Haraam he should do so with his right foot first, and say,

“In the name of Allah, and blessings and peace be upon the Messenger of Allah. O Allah, forgive me my sins and open to me the gates of Your mercy. I seek refuge with Allah the Almighty and in His noble Countenance and His eternal power from the accursed Satan.”

There is a great deal of virtue in touching the Black Stone, because the Prophet salAllahu ‘alayhi wa sallam said, “Allah will raise up the Black Stone on the Day of Resurrection and it will have two eyes with which it will see and a tongue with which it will speak, and it will bear witness for those who touched it in sincerity.” [Classed as saheeh by al-Albaani in Saheeh al-Targheeb wa’l-Tarheeb, 1144]

It is better not to crowd around and cause annoyance to people or be annoyed by them, because of the hadeeth in which the Prophet salAllahu ‘alayhi wa sallam said to ‘Umar, “O ‘Umar, you are a strong man, do not crowd around the Stone and disturb the weak. If you find space, then touch it, otherwise just face it and say ‘Allahu akbar.’” [Narrated by Ahmad, 191; classed as qawiy by al-Albaani inRisaalat Manaasik al-Hajj wa’l-‘Umrah, p. 21]

Every time he passes the Black Stone he should face it and say ‘Allahu Akbar’, and in the rest of his tawaaf he should recite whatever he likes of dhikr, du’a, and Qur’an because tawaaf around the Ka’abah has been established for the remembrance of Allah.

In Tawaaf men should do two things:

1 – Uncovering the right shoulder (idtibaa’) from the beginning of tawaaf until the end.

This is done by placing the middle of the rida’ (upper garment) beneath the right armpit and the ends of the rida’ over the left shoulder. When the pilgrim finishes tawaaf, he should put his rida’ back as it was before tawaaf, because the time for wearing it with one shoulder uncovered is only in tawaaf.

2 – Raml in the first three circuits only. Raml means walking quickly with short steps. In the last four circuits there is no raml, rather the pilgrim should walk normally.

When the pilgrim has completed seven circuits of tawaaf, he should cover his right shoulder and then go to the Station of Ibraheem (Maqaam Ibraheem) and recite the words (interpretation of the meaning):

Then he should pray two rak’ahs behind the Station; in the first rak’ah after reciting al-Faatihah he should recite Yaa ayyaha’l-kaafiroon (Surah al-Kaafiroon) and in the second Qul Huwa Allahu ahad (Surah al-Ikhlaas). Then when he has finished this prayer he should go to the Black Stone and touch it if he can. It is prescribed at this point to touch it only; if he cannot do that then he should go away and not point to it.

Then after he has done tawaaf and prayed two rak’ahs, it is masnoon to drink water from zamzam and to pour a little on the head.He should now go to the Mas’a (place for doing saa’i) and perform saa’i between al-Safa and al-Marwah.

Originally published at this link.

One thought on “Description of Hajj [Part 2]”