Ayaat 23-25 – the Revelation of Qur’an, Patience and Remembrance of Allah

In these ayaat three things have been stated, 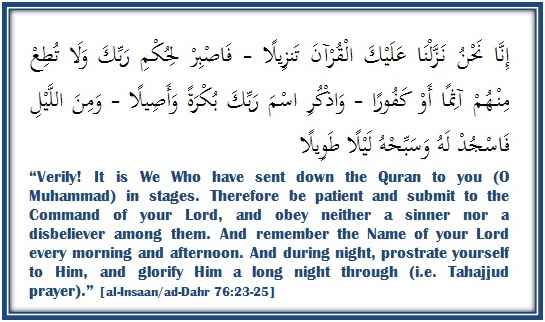 Allah subhanahu wa ta’ala reminds the Prophet salAllahu ‘alayhi wa sallam how He blessed him by revealing the magnificent Qur’an to him. Though the addressee here apparently is the Prophet, the discourse is directed to the disbelievers who accused the Prophet for forging it. They claimed, “Muhammad himself composes the Qur’an deliberately piece by piece; had it been from Allah, it would be revealed all at once.” Therefore, Allah subhanahu wa ta’ala said, “Verily! It is We Who have sent down the Quran to you (O Muhammad) in stages,” (76:23). Meaning it is not the composition of Muhammad (salAllahu ‘alayhi wa sallam). It is from Allah Who sends it gradually out of His wisdom.

“Therefore be patient and submit to the Command of your Lord,” (76:24), meaning just as you have been honored by what has been revealed to you, then be patient with His decree and decision and know that He will handle your affairs in a good manner. Be firm and steadfast in whatever comes to pass. Do not show any weakness in this regard. “…and obey neither a sinner nor a disbeliever among them,” (76:24) the athim [اثِم] is the ‘sinner in his deeds’ and the kafoor [كَفُوراً] is the ‘disbeliever in his heart.’  Do not obey the disbelievers and the hypocrites if they wish to deter you from what has been revealed to you. Rather convey that which has been revealed to you from your Lord and put your trust in Allah, for verily, Allah will protect you from the people. Proclaim whatever is unlawful and forbidden openly even if an immoral person might press you hard to show some lenience in this condemnation. Proclaim whatever is false as false and whatever is true as true publicly even if the disbelievers might use all their influence to silence you, or to make you adopt a little lenience in this regard.

“And remember the Name of your Lord every morning and afternoon,” (76:25), the rule followed in the Qur’an is that wherever the Muslims have been exhorted to show patience against the disbelievers, immediately after it they have been commanded to remember Allah much and to observe the prayer, which automatically implies that the power needed to meet the resistance of the enemies in the way of truth can be obtained only by this means. To remember Allah subhanahu wa ta’ala morning and evening may also imply remembering Allah subhanahu wa ta’ala always but when the command to remember Allah at specific times is given, it implies the salat (prayer).

In this ayah, bukrah means ‘the morning’ and asil the ‘time from the sun’s decline till sunset,’ which covers the Zuhr and the ‘Asr times. Night starts after sunset therefore, the command to ‘prostrate yourself in the night’ would apply to both the Maghrib and the ‘Isha prayers. Then, the command ‘to glorify Allah in the long hours of night,’ clearly points to the time of the Tahajjud prayer.

So we learn there is a command to remember Allah subhanahu wa ta’ala at the beginning of the day and at its end.