In the previous ayaat, we learned the punishment of the one who deliberately lies about the Qur’an and the Messenger salAllahu ‘alayhi wa sallam will be Hellfire. Now, Allah subhanahu wa ta’ala describes what this Hellfire will be like. He says,

The word saqar is from the root seen-qaf-ra and it means ‘to injure by heat, to scorch, to burn, to heat or to melt, anything that changes the nature of by melting it or the fire of Hell.’ Here, it is used in the context of Hellfire. Allah subhanahu wa ta’ala explains this fire will engulf man from all his sides eating his flesh, veins, nerves and his skin. His organs will be changed into something else. They will remain in this form, neither living nor dying. Over this fire are nineteen angels appointed as guards. When Abu Jahl heard their number he addressed the youth of Quraysh and said that Muhammad (salAllahu ‘alayhi wa sallam) has only nineteen companions, so there is nothing to worry about.

Baihaqi records a narrative from Suddi that when ayah 30 was revealed, a disbelieving Quraysh, Abu al-Ashaddayn said, “O nation of Quraysh, I alone am sufficient for the nineteen. I will take care of ten with my right arm, and nine with my left arm. Thus I will put an end to all nineteen of them.” At this occasion, ayah 31 was revealed.

“We have fixed their number only as a trial for the disbelievers,” (74: 31) meaning the number of angels mentioned is only a test. Upon hearing their number the Quraysh are wondering ‘only nineteen’ but they have no idea about the magnificence or size of these angels. Unlike human beings they are huge and harsh when it comes to carrying out punishments. The Prophet salAllahu ‘alayhi wa sallam informed us every day seventy thousand angels enter al-Bayt al-Ma’moor (the Frequented House in the seventh heaven) and they do not return to it because there are too many angels to get a second chance to visit. It is one in a lifetime kind of a trip.

Secondly, this number was specified because the People of the Scripture were informed of this number in their books too. The purpose behind re-stating it was to help them acknowledge the Prophethood of Muhammad salAllahu ‘alayhi wa sallam and that he is indeed speaking the truth. Those who have true faith in their heart, they will believe in it as revealed by Allah subhanahu wa ta’ala however those who disbelieve and are hypocrites will ask: what does Allah mean by this.  We read a similar ayah in Surah al-Baqarah where Allah subhanahu wa ta’ala says, “… those who believe, they know that it is the Truth from their Lord, but as for those who disbelieve, they say: “What did Allah intend by this parable?” By it He misleads many, and many He guides thereby. And He misleads thereby only those who are disobedient to Allah,” (2:26).

There is only one Qur’an and the message in it is same for everyone but different people interpret the message differently. It is because of the level of their emaan. Those who are strong in faith take it as Allah subhanahu wa ta’ala intended it to be. But those who approach the Qur’an for intellectual debates or with doubt take least benefit from it. Therefore, we must ask Allah subhanahu wa ta’ala to soften and open up our hearts to true guidance.

None knows the true count or the size of the Soldiers of Allah (the angels) except Allah subhanahu wa ta’ala therefore one must not talk about things that he has no knowledge of. The reason behind mentioning the count here was nothing but ‘to warn’ mankind. Those angels are the Soldiers of Allah and they are harsh in their treatment. One cannot escape the punishment of Allah subhanahu wa ta’ala unless he takes heed and changes his course.

By starting the address with kalla Allah subhanahu wa ta’ala warns the disbelievers that this reminder is not a hollow thing to be mocked at. Just as the moon and the night and the day are the great signs of the powers of Allah subhanahu wa ta’ala, so also is Hell a great sign of His powers. We witness the alternation between the day and the night every day but do not feel surprised. As naturally as the day changes into night and the night changes into day, so will the Hell be.

People have been warned, “…any of you that chooses to go forward, or to remain behind,” (74: 37). Now whoever wishes to accept the warning and be guided to the truth he will move forward to do good deeds. But he who holds back from accepting it, turns away and rejects it will stay behind.

“Every person is a pledge for what he has earned, except those on the Right,” (74: 38-39), the word rahinah is derived from the word rahn which means ‘to give something valuable to a pawnbroker as a security for a debt.’ Every person on the Day of Judgment will be detained in lieu of his sins, except those who will be given their Book of Deeds in their right hands. The People of the Right are those who repaid their debt that is they have fulfilled their obligations in this world towards Allah subhanahu wa ta’ala and other human beings.

At several places in the Qur’an it has been stated that the dwellers of Jannah will speak with the dwellers of Hell. Here, Allah subhanahu wa ta’ala tells us that while the People of the Right are in their lofty rooms they will ask the wrongdoers in Hell the reason for their admittance into the Hellfire. The people of Hellfire will reply, “We were not of those who used to offer their prayers,” (74: 43). They will not say, “We were those who did not belief,” rather the reason for their admittance into the Hellfire was their not offering prayers. Today, many of us take our prayers lightly. We are believers, some of us even born Muslims, but we do not consider Salah a significant matter. Some of us claim, “As long as I am good human being, Salah does not matter.” Another reason for their admittance into Hellfire, “nor we used to feed the poor,” (74: 44). We know that Abu Bakr Siddeeq radhiAllahu ‘anhu was known for his generosity and to him the Prophet salAllahu ‘alayhi wa sallam said: I wish you are the one who enters through all the gates of Jannah.

Whenever you get an opportunity to contribute in a food bank or soup kitchen hasten to do so. Do not think whether they are believers or disbelievers, help them thinking they are a creation of Allah subhanahu wa ta’ala.

“…and we used to talk falsehood with vain talkers,” (74: 45) another reason: not being conscious of the company that they kept and how they spent their time. Do not waste your time in futile gatherings and vain activities. If you cannot find the right company excuse yourself and spend that time doing something that pleases Allah subhanahu wa ta’ala.

“And we used to belie the Day of Recompense until there came to us (the death) that is certain,’” (74: 46-47) their denial of the Hereafter led them to this. Many people die with regrets. Let us not be among those. Let us correct our ways before our time is up. Allah subhanahu wa ta’ala says, “So no intercession of intercessors will be of any use to them,” (74: 48). A dying person takes along only the deeds that he has done. No intercession can help him in the Hereafter. Many people are base their hopes on the shifa’at of the Prophet salAllahu ‘alayhi wa sallam we must know there is no guarantee that we will be receive it. Only he for whom Allah subhanahu wa ta’ala chooses will be honored with the intercession of the Prophet salAllahu ‘alayhi wa sallam.

Ayaat 49-56 ― What Makes One Turn Away from Admonition 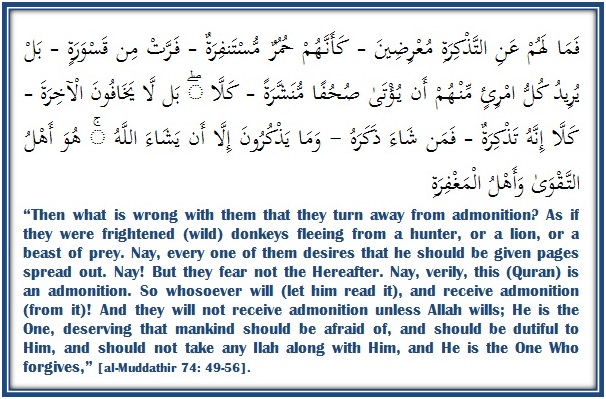 Allah subhanahu wa ta’ala questions their behavior for turning away from what the Prophet salAllahu ‘alayhi wa sallam called them towards. They have been compared with frightened wild donkeys that run away for their life upon seeing their predator.

Allah subhanahu wa ta’ala responds to their demand by saying, “Nay! But they fear not the Hereafter. Nay, verily, this (Quran) is an admonition,” (74: 53-54). The reason that they can come with such demands is that they do not believe in the Resurrection and accountability in the Hereafter. They think this life is all that is there. Their disbelief in the Hereafter has made them irresponsible and fearless. Qur’an is a reminder for whoever wants to take heed. It introduces us to Allah subhanahu wa ta’ala and His magnificent sifaat (attributes) such as His rahmah (mercy) and generosity. But a person who never reads the Qur’an or never yearns to understand its meaning cannot taste the treasures of this Book.

May Allah subhanahu wa ta’ala allow us to live our lives as His humble servants and honor Him as He deserves to be honored, aameen.