Ayaat 18-24 ― the Children of Adam being Presented before Allah

Now begins the description of the event when everyone will be presented before their Creator, Allah subhanahu wa ta’ala, and handed over their records. 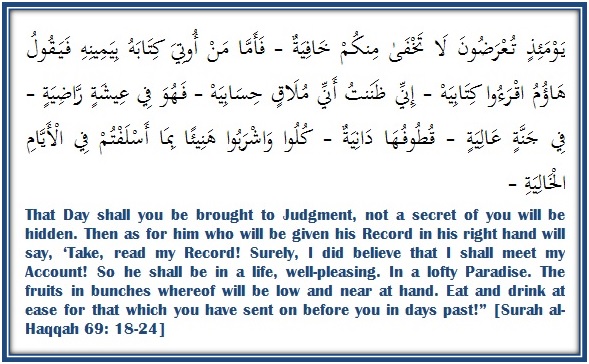 The word tu’radoon [تُعْرَضُون] is from the root ayn-ra-dad which means ‘to show, to present or to set before’. This word is used when a seller or a merchant presents his merchandize to a buyer and allows him to check it. On that Day, we will be presented to the Knower of the secrets and private counsels for inspection. He is the One from Whom none of our affairs are hidden. He is the Knower of all things apparent, secret and hidden. The arrogant ones think that no one controls them and they are the in-charge but on that Day Allah subhanahu wa ta’ala will inspect them and question them for what they did. We will all be handed over just like merchandize without having any control over ourselves. We ask Allah subhanahu wa ta’ala for an easy reckoning, aameen.

In the previous ayaat we learned about the destruction of mightier objects such as the earth and the mountains and now Allah subhanahu wa ta’ala talks about the accountability of man. There was a reason why the destruction of other objects was mentioned first. In the dunya when a calamity strikes whether a natural disaster or a burglary we try to seek refuge behind other things. But when on the Judgment Day the entire earth will be flattened with no trees or mountains then where will man hide?

“The people will be exhibited three times on the Day of Judgment. The first two presentations will be (their) arguing and offering excuses. During the third presentation the pages (records) will fly into their hands. Some of them will receive the records in their right hands and some will receive them in their left hands.” [Ibn Majah, at-Tirmidhi]

Now begins the description of two kinds of people on the Day of Judgment. Allah subhanahu wa ta’ala informs us of the happiness of those who will receive their Book in their right hand. Out of their extreme pleasure they will be showing off their records to everyone. They will be of those whose bad deeds will have been replaced with good deeds. Ibn Abi Hatim recorded that ‘Abdullah ibn ‘Abdullah ibn Hanzalah said, “Verily, Allah will stop His servant on the Day of Judgment and He will make his sins appear on the outside of his Book of Records. Then He will say to him, ‘Did you do this?’ The servant will respond, ‘Yes, my Lord.’ Then Allah will say to him, ‘I will not expose you (or dishonor you) for it, for verily, I have forgiven you.’ The person will then say, ‘Here (you all) read my Book!’”

In the Saheeh it is recorded from ibn ‘Umar radhiAllahu ‘anhu that he was asked about the private counsel. He responded by saying that he heard the Messenger of Allah salAllahu ‘alayhi wa sallam saying,

“Allah will bring the servant close (to Him) on the Day of Judgment and make him confess all of his sins. This will continue until the servant thinks that he is about to be destroyed. Then Allah ta’ala will say, ‘Verily, I have concealed these sins for you in the worldly life and I have forgiven you for them today.’ Then he will be given his Book of good deeds in his right hand. However, about the unbeliever and the hypocrite, the witnesses will say, ‘These are those who lied on their Lord, and verily, the curse of Allah is on the wrongdoers.’”

Upon being saved from disgrace and exposure man will say, “Surely, I did believe that I shall meet my Account!” (69: 20) meaning I was certain in the worldly life that this world would definitely come to an end. He had been conscious of the Hereafter and had lived his worldly life with the belief that one day he would have to appear before Allah subhanahu wa ta’ala and render his account to Him. He kept away from the sins reminding himself of the accountability and the testimony of his skin and limbs against him in case he slips. “So he shall be in a life, well-pleasing,” (69:21) living in elevated castles, pleasant stations and eternal joy. The Prophet salAllahu ‘alayhi wa sallam said,

“Verily, Paradise has one hundred levels and between each level is a distance like the distance between the earth and the sky.”

Allah subhanahu wa ta’ala goes on to describe the trees of Jannah, “The fruits in bunches whereof will be low and near at hand,” (69: 23). Al-Bara ibn ‘Azib said that the fruits will be close enough for the people of Paradise to reach them while they are lying on their beds. Man will be resting and lying down, and when he wants a fruit of his choice the fruit tree will come closer to him, bend down and allow the man to take a bite of its fruit. Then it will raise itself back up until man desires another bite. It will again lower itself and serve man. Allah subhanahu wa ta’ala will allow this to happen because He has prepared a life free from hardship and effort for the dwellers of Jannah. May He choose us to be from among them too, and we get our Book of Deeds in our right hands, aameen.

“Eat and drink at ease for that which you have sent on before you in days past!” (69: 24) this will be said to the People of Paradise as an invitation to them of blessing, favor and goodness in return for their good deeds. Therefore, the Messenger of Allah salAllahu ‘alayhi wa sallam said,

“Work deeds, strive, seek to draw near (to Allah) and know that none of you will be admitted into Paradise because of his deeds.” The Companions radhiAllahu ‘anhum asked, “Not even you, O Messenger of Allah?” He replied,

“Not even me, except if Allah covers me with mercy from Himself and grace.”