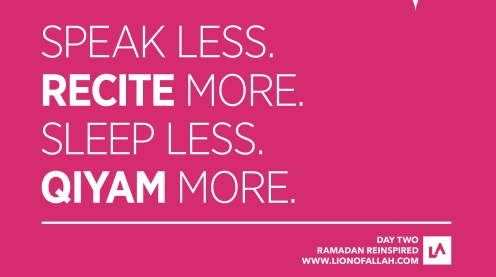 At another place, it is said,

“The month of Ramadan [is that] in which was revealed the Qur’an, a guidance for the people and clear proofs of guidance and criterion.” [al-Baqarah 2: 185]

‘Abdullah ibn Masood radhiAllahu ‘anhu said, “Jibreel used to meet him every night of the month of Ramadan till it elapsed. Allah’s Messenger used to recite the Qur’an to him.” [Bukhari: 1902]

[Peak of Generosity in the Month of Ramadan]

We learn through another narration that the Prophet salAllahu ‘alayhi wa sallam used to recite the Qur’an (whatever had been revealed thus far) to Jibreel ‘alayhi salaam once every year and in the last year of his life, he did so twice. [Bukhari: 3624]

From the above ahadeeth, we learn of the close affinity between our Prophet salAllahu ‘alayhi wa sallam and the Qur’an. Therefore, we should also establish a close relationship with the Qur’an during this special month. We can do this in the following manner:

Recitation of the Qur’an

“Indeed, those who recite the Book of Allah and establish prayer and spend (in His cause) out of what We have provided them, secretly and publicly, (can) expect a profit that will never perish.” [Fatir: 29]

That is why we should spend more time reading the Qur’an during the month of Ramadan as compared to other days.

[The Majestic Quran and the Month of Ramadan]

Recitation of the Qur’an during Night Prayers

Reciting and listening to the Qur’an during Taraweeh or Qiyam ul Layl (voluntary night prayers) will be a means of intercession on the Day of Judgment. ‘Abdullah ibn ‘Amr radhiAllahu ‘anhu narrated that the Prophet salAllahu ‘alayhi wa sallam said,

“The fast and the Qur’an are two intercessors for the servant of Allah on the Day of Resurrection. The fast will say, ‘O Lord, I prevented him from his food and desires during the day. Let me intercede for him.’ The Qur’an will say, ‘I prevented him from sleeping at night. Let me intercede for him.’ And their intercession will be accepted.” [Musnad Ahmad, Vol.11, 6626]

We also learn from the narration of ‘Abdullah ibn ‘Abbas radhiAllahu ‘anhu that reading the Qur’an during the night is better as compared to that done during the day for the Prophet salAllahu ‘alayhi wa sallam used to recite to Jibreel every night.

[Ruling on Reading from the Mus-haf during Prayer]

Apart from reciting the Qur’an, memorizing and preserving it in the heart is also a noble deed. ‘Abdullah ibn ‘Amr ibn al-Aas radhiAllahu ‘anhu narrated that the Prophet salAllahu ‘alayhi wa sallam said,

“The one who was devoted to the Qur’an will be told on the Day of Resurrection: Recite and ascend (in ranks) as you used to recite when you were in the world. Your rank will be at the last Ayah you recite.” [Sunan Abu Dawoud: 1464]

Obviously, this would only be possible for those who have memorized and preserved the Qur’an in their hearts.

[How to Memorize the Qur’an]

Reflecting on the Qur’an

To ponder and reflect upon the meanings of the ayaat of the Qur’an is also considered a meritorious act. We should try to reflect deeply on its ayaat so that we may understand it better and implement it accordingly. Indeed, the Qur’an has been revealed for the practical guidance of all mankind.

“[This is] a blessed Book which We have revealed to you, [O Muhammad], that they might reflect upon its ayaat and that those of understanding would be reminded.” [Sa’ad: 29]

[The Relationship of the Salaf with the Quran in Ramadan]

Learning and teaching the Qur’an

Individual recitation and reflection upon the Qur’an, learning and teaching it in study circles is a source of immense blessings from Allah subhanahu wa ta’ala.

“No people gather in one of the houses of Allah, reciting, the Book of Allah and teaching it to one another, but the angels will surround them, tranquility will descend upon them mercy will envelop them and Allah will mention them to those who are with Him (angels).” [Muslim: 6953]

– Recite the Qu’ran frequently during Ramadan. Complete its recitation in entirety at least once by yourself.

– If you have memorized all or part of the Qur’an, set up a time to revise it formally on a regular basis. Otherwise, try to memorize some portions of the Qur’an.

– Ensure that you listen to the entire Qur’an behind the Imam during the voluntary night prayer (Taraweeh).

– Make an effort to understand and reflect upon the meanings of the Qur’an.

– Invite family and friends to the Qur’an and encourage them towards its understanding, as hearts are more inclined towards goodness during the blessed month of Ramadan.

– Try to attend any locally-organized gathering of Dawrah-e-Qur’an (review of the Qur’an) or listen to one online, so that you can educate yourself or somebody else.

– Listen to CDs or audio tapes of the Qur’an and its meanings and share such audio resources with others as well.

One thought on “Ramadan: the Month of Qur’an”