Choosing Some Angels to believe in over Others is Disbelief

Anas ibn Malik radhiAllahu ‘anhu narrated when ‘Abdullah bin Salam radhiAllahu ‘anhu heard of the arrival of the Prophet ﷺ in Madinah, he was working on his land. He came to the Prophet ﷺ and said, “I am going to ask you about three things which nobody knows except a Prophet: What will be the first portent of the Hour? What will be the first meal taken by the people of Paradise? Why does a child resemble its father, and why does it resemble its maternal uncle?” Allah’s Messenger ﷺ said, “Jibreel has just told me the answers.” ‘Abdullah said, “He (i.e. Jibreel), among all the angels, is the enemy of the Jews.” Allah’s Messenger ﷺ recited the ayah,

“Whoever is an enemy to Jibreel (Gabriel), for indeed he has brought it (this Qur’an) down to your heart).”

Allah’s Messenger ﷺ then said, “The first portent of the Hour will be a fire that will bring together the people from the east to the west; the first meal of the people of Paradise will be the caudate lobe of the liver of fish. As for the child resembling his parents: If a man has sexual intercourse with his wife and his discharge is first, the child will resemble the father. If the woman has a discharge first, the child will resemble her side of the family.”

On that ‘Abdullah bin Salam radhiAllahu ‘anhu said, “I testify that there is no deity worthy of worship except Allah and you are the Messenger of Allah.” ‘Abdullah bin Salam further said, “O Allah’s Messenger ﷺ! The Jews are liars, and if they should come to know about my conversion to Islam before you ask them (about me), they will tell a lie about me.” The Jews came to Allah’s Messenger ﷺ, and ‘Abdullah went inside the house.

Allah’s Messenger ﷺ asked (the Jews), “What kind of man is ‘Abdullah bin Salam?” They replied, “He is the best among us, the son of the best among us, our master and the son of our master.” Allah’s Messenger ﷺ said, “What do you think if he would embrace Islam?” The Jews said, “May Allah save him from it.” Then ‘Abdullah bin Salam radhiAllahu ‘anhu came out in front of them saying, “I testify that none has the right to be worshiped but Allah and that Muhammad is the Messenger of Allah.” Thereupon they said, “He is the evilest among us, and the son of the evilest among us.” And they continued talking badly about him. Ibn Salam said, “This is what I feared, O Messenger of Allah ﷺ!” [Bukhari]

Allah subhanahu wa ta’ala said, “Whoever is an enemy of Jibreel (Gabriel), for indeed he has brought it (this Qur’an) down to your heart by Allah’s permission,” meaning whoever becomes an enemy of Angel Jibreel let him know that he is Ruh Al-Qudus (the pure spirit) who brought down the Glorious Thikr (Qur’an) to the heart of Muhammad ﷺ by Allah’s leave. Hence, he is a messenger from Allah subhanahu wa ta’ala . Whoever takes a messenger as an enemy, will have taken all the messengers as enemies. Further, whoever believes in one messenger, is required to believe in all of the messengers. Whoever rejects one messenger, he has rejected all of the messengers.

A similar statement has been said in Surah An-Nisa,

Allah subhanahu wa ta’ala decreed that they are disbelievers, because they believe in some prophets and reject others. This is the same with those who take Jibreel as an enemy because Jibreel did not choose missions on his own, but by the command of his Lord,

“And truly, this (the Qur’an) is a revelation from the Lord of all that exists. Which the trustworthy Ruh (Jibreel) has brought down. Upon your heart (O Muhammad ﷺ) that you may be (one) of the warners,” (26:192-194).

“Allah said, ‘Whoever takes a friend of Mine as an enemy, will have started a war with Me.’”

“…confirming that which was before it, and as guidance and good tidings for the believers,” meaning, the Qur’an confirms what is in the previous Books (as they were first revealed), and it contains guidance for the believers and good news of Paradise for them.

We learn three attributes of the Qur’an. It is Musaddiq (confirms/testifies), Huda (guidance), and Bushra (good news/ glad tiding). Qur’an is a source of guidance; therefore, we should take our guidance from this Book and not what people say or do. We should be curious to know what Allah subhanahu wa ta’ala expects from us. We should ask Him to show us the path that He has chosen for us.

The Qur’an has also been called shifa (healing) as we read in Surah Isra ayah 82.

Therefore, whenever you are feeling lost, depressed or constricted stop worrying (or crying), and instead pick up the Qur’an. Go on reading and Allah subhanahu wa ta’ala will alleviate sadness and anxiety from your heart. The scholars say that if you commit to the Qur’an, Allah subhanahu wa ta’ala will give you more. The more here means that He will answer the du’as that you made and those that you did not make. And, whatever He will give you in return for your association with His Book will be much better than you had imagined.

We ask Allah subhanahu wa ta’ala to make us from the bearer of the Qur’an and the people of the Qur’an, ameen.

Important Note: The scholars said that the words Jibr, Mik and Israf (at the beginning of angels’ names) all mean ‘worshiper’ while ‘eel’ or ‘il’ means Allah. For example, Jibr-eel: Worshiper of Allah. Similarly, Isra-eel means worshiper of Allah. This was a title of Prophet Yaqoob ‘alayhi salaam. It is similar to names such as, ‘Abdullah, ‘Abdur Rahman, and so forth. As in these names ‘Abd is a constant similarly ‘eel or ‘il’ is a constant in Jibreel, Mika’el and Israfeel.

“Whoever is an enemy to Allah and His Angels and His Messengers and Jibreel and Mika’el (Michael) – then indeed, Allah is an enemy to the disbelievers.” Believe in all the messengers is part of our faith. Disbelieving in any one of them will lead to kufr (disbelief).

Angel Jibreel (Gabriel) and Mika’el (Michael), have been specifically mentioned, although they are included among the angels who were messengers. It is because this ayah was meant to support Jibreel the emissary between Allah subhanahu wa ta’ala and His Prophets. Allah subhanahu wa ta’ala also mentioned Mika’el here, because the Jews claimed that Jibreel was their enemy and Mika’el was their friend. Allah subhanahu wa ta’ala informed them that whoever is an enemy of either of them, then he is also an enemy of the other as well as Allah’s. We should state here that Mika’el sometimes descended to some of Allah’s Prophets, although to a lesser extent than Jibreel, because this was primarily Jibreel’s task, and Israfeel is entrusted with the job of blowing the Trumpet on the Day of Judgment.

It is recorded in the Saheeh that whenever the Messenger of Allah ﷺ would wake up at night (Tahajjud), he would supplicate, 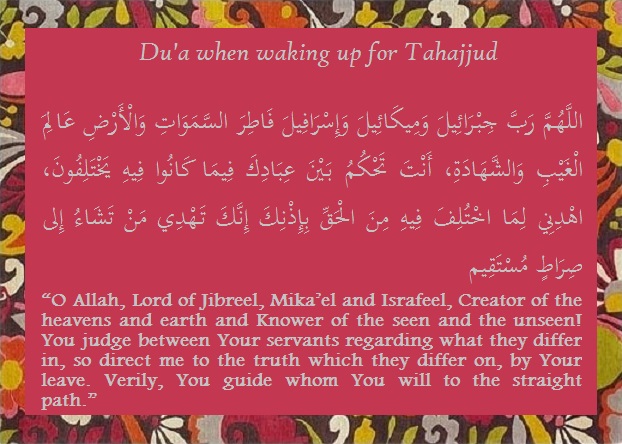 It is important to love the friends of Allah subhanahu wa ta’ala. Whoever does not do so then all his deeds will be wasted no matter how many good deeds he performs.

Allah subhanahu wa ta’ala helps His friends. They please Him and He is pleased with them. They remember Him in good times, He does not leave them in their testing times. Rather, He hastens to solve their problems and make things easier for them.

Who are the Friends of Allah (Awliya Allah)?