In the previous ayah, we learned about the prohibition to ask unnecessary questions, in this ayah Allah subhanahu wa ta’ala narrates to us the reason behind this ruling. 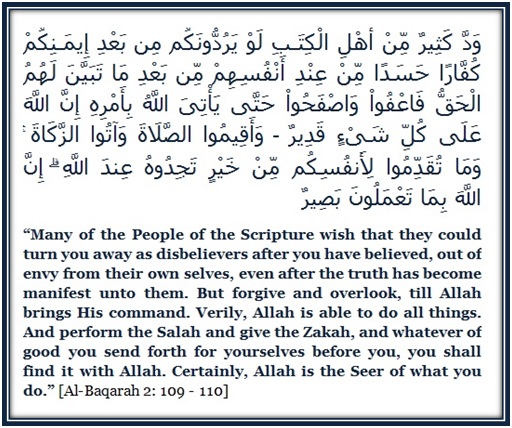 Some of the Jews pretending to be the well-wishers of the Muslims, were always inventing new stratagems to make them turn away from Islam. In spite of repeated failure in this effort, they did not refrain from it. The ayah warns the Muslims against their intentions, which are motivated, not by sincerity and friendship, but by envy. The ayah also asks the Muslims not to give way to their justifiable anger at such misconduct, but to forgive the Jews and wait till Allah subhanahu wa ta’ala sends a new commandment with regard to such matters.  For the time being, the Muslims were encouraged to perform their prayers perfectly, pay their Zakah [obligatory charity], and preserve the practice of these righteous deeds.

Ibn ‘Abbas radhiAllahu ‘anhu said, “An unlettered Messenger came to the People of the Scriptures confirming what they have in their own Books about the Messengers and the Signs of Allah. He also believes in all of this, just as they believe in it. Yet, they rejected the Prophet out of disbelief, envy and transgression. This is why Allah subhanahu wa ta’ala said,

‘…out of envy from their own selves, even after the truth (that Muhammad is Allah’s Messenger) has become manifest unto them.’

Abu Al-‘Aliyah added that after it became clear that Muhammad salAllahu ‘alayhi wa sallam is the Messenger of Allah whose description they find in the Torah and the Injeel [Gospel], they denied him in disbelief and transgression because he was not one of them.

We learn that we should not blindly follow people or be influenced by what they say. We should be judicious and ascertain the truth on our own. For example, in the times that we are living, there will be people that stop you from attending a Qur’an class or a religious lecture. They will call you names, criticize and mock you. You have two options: listen to them and not learn anything, or take a stand and attend the class no matter what people say. We should ask Allah subhanahu wa ta’ala for courage to follow the right path.

When you begin to follow the right path, people will say you are being brainwashed. Who gets brainwashed? The weak and vulnerable! A person who uses his mind and thinking ability cannot be brainwashed. So, become strong and use your brain.

We also learn the reason that why people stop others from doing something. “…out of envy from their own selves,”  they are jealous.

Allah subhanahu wa ta’ala responded, “But forgive and overlook, till Allah brings His command.” This is similar to what appears in Surah Aal-Imran ayah 186,

“And you shall certainly hear much that will grieve you from those who received the Scripture before you and from those who ascribe partners to Allah.” (3: 186)

This part of the ayah “But forgive and overlook…” was later abrogated by the ayaat of Surah At-Tawbah. It should be mentioned that while the latter ayaat speak about killing those who do not believe in Allah subhanahu wa ta’ala and the Last Day, this does not mean killing innocent civilians. We learn in other parts of the Qur’an that those who show kindness to us and do not support oppression must be shown kindness and not be harmed in any way.

The Messenger of Allah salAllahu ‘alayhi wa sallam and his Companions radhiAllahu ‘anhum used to forgive and be patient with the disbelievers as Allah subhanahu wa ta’ala had ordered, until fighting them was permitted.

When you are being opposed, neither fight back nor respond, “But forgive and overlook…” even if you have the strength to counter attack.

Be a person of admirable conduct. Meet your opponents with such grace as if nothing happened.  This is especially required from those who are engaged in da’wah work. It is obligatory on the caller to religion to think good for everyone and be a person of excellent character.

The Muslims were conscious of their weakness and the strength of their foe. They could have wondered how they would be able to act upon the new law. Therefore, Allah subhanahu wa ta’ala said, “Verily, Allah is able to do all things,” and reminded them that His power extends over everything, small or big, ordinary or extraordinary.

The Encouragement to perform Good Deeds

By saying, “And perform the Salah and give the Zakah, and whatever of good you send forth for yourselves before you, you shall find it with Allah,” Allah subhanahu wa ta’ala encouraged the believers to busy themselves in performing deeds that would bring them benefit and reward on the Day of Resurrection, such as prayer and paying Zakah. This way, they will gain Allah’s aid in this life and on a Day when the witnesses testify.

When you are hurt or being opposed turn your attention to Allah subhanahu wa ta’ala. Focus on your prayers and ask Him for help. Increase voluntary charity and give in His path generously.

We learn the tip for diverting our attention from pain to that which will comfort us. Our hearts will find solace by this diversion and also find the reward, of whatever good deeds we do in this life, in the Hereafter.

Increase istaghfar [seeking forgiveness] because whatever harm we face in this world is because of our own doing. We err and we forget. Allah subhanahu wa ta’ala makes us go through tests and reminds us our mistakes. We should keep repenting for the sins that we know and those are that are unknown to us.