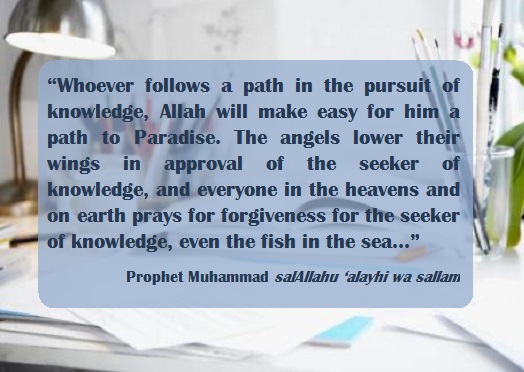 Praise be to Allah

Virtues of Seeking Knowledge in Islam

The status of the seeker of Islamic knowledge is great in Islam. Allah subhanahu wa ta’ala has praised knowledge and those who seek it, as He says (interpretation of the meaning):

“Only those fear Allah, from among His servants, who have knowledge…” [Faatir 35:28]

It was narrated that Humayd ibn ‘Abd ar-Rahman said: I heard Mu‘aawiyah say, when he was delivering a khutbah: I heard the Messenger of Allah salAllahu ‘alayhi wa sallam say, “When Allah wills good for a person, He deepens his knowledge of Islam.” [al-Bukhari (71) and Muslim (1037)]

[How to Seek Knowledge]

It was narrated that ‘Abu Darda radhiAllahu ‘anhu said: I heard the Messenger of Allah salAllahu ‘alayhi wa sallam say,

“Whoever follows a path in the pursuit of knowledge, Allah will make easy for him a path to Paradise. The angels lower their wings in approval of the seeker of knowledge, and everyone in the heavens and on earth prays for forgiveness for the seeker of knowledge, even the fish in the sea. The superiority of the scholar over the worshiper is like the superiority of the moon over all other heavenly bodies. The scholars are the heirs of the Prophets, for the Prophets did not leave behind Dinars or Dirhams, rather they left behind knowledge, so whoever takes it has taken a great share.” [at-Tirmidhi (2682), Abu Daw’oud (3541) and Ibn Maajah (223); classed as hasan by al-Albaani in Saheeh at-Targheeb, 1/17]

Islamic knowledge brings a person the good of this world and of the Hereafter; it takes precedence over all other branches of knowledge, especially if one’s intention is pure.

[The Advantages of memorizing the Qur’an]

One of the things that will make things easier for the seeker of knowledge is to have many shaykhs and scholars from whom he can learn. The quickest way to seek knowledge and the best way to attain the goal is if Allah subhanahu wa ta’ala makes it easy for him to find one shaykh or scholar among the scholars of the Sunnah, from whom he may acquire knowledge directly.

With regard to organizing your time, it may be as follows:

(a) Have Fixed Times

(b) Put a Stop to Time Wasters

One of the things that will help you make the most of your time and save time is to put a stop to time wasters such as sleeping, eating and drinking too much, or meeting people except for Islamic beneficial purposes. You should also avoid time wasters such as means of entertainment like TV shows, soap operas, newspapers, magazines, games, sports matches and competitions.

Shaykh Muhammad ibn Saalih al-‘Uthaymeen (may Allah have mercy on him) said:

The seeker of knowledge must make the most of his time and avoid wasting time. Wasting time may take the following forms:

Focusing on who said what and asking a lot of questions are time wasters. In fact, it is a kind of sickness which if it affects a person – we ask Allah to keep us safe and sound – will become his main focus and concern. The person may end up showing hostile attitude toward one who does not deserve enmity, or he may be friendly toward one who does not deserve friendship, because of his interest in these matters that are distracting him from seeking knowledge, on the grounds that this is part of supporting the truth. But that is not the case; rather this comes under the heading of being distracted by that which does not concern one. But if news comes to you without you seeking it or looking for it, everyone receives news but you should not be preoccupied with it or focus on it, because this causes distraction for the seeker of knowledge and may confuse him, and it opens the door to partisanship and division among the Ummah. [Kitaab al-‘Ilm, p. 143-144]

Another matter that is detrimental to the issue of organizing one’s time and making the most of it is procrastination. Procrastination is a severe disease that deprives one of many good things in this world and in the Hereafter.

(d) Stay Busy at All Times

One of the best ways of succeeding in this world is to keep yourself busy at all times with that which is best for you and most beneficial for you in the Hereafter, as Ibn al-Qayyim (may Allah have mercy on him) said:

The best act of worship is to strive to please the Lord at all times by doing that which is most appropriate and is expected at any particular time. [Madaarij as-Saalikeen, 1/88]

Investing one’s time as much as one can and not wasting a single moment in anything that is not an act of obedience or worship. Our early generations (may Allah have mercy on them) set an amazing example of making the most of their time. All seekers of Qur’anic knowledge were keen to study under Abu Na‘eem al-Asfahaani (d. 430) and every day one of them would have his turn and he would study whatever he wanted with the Shaykh until just before Zuhr. Then when he got up to go home, another student might recite a Juz to him on the way (for him to listen and correct), and he never showed any impatience.

[Basic Principles of memorizing the Qur’an]

One day, Saleem ar-Raazi went home and came back, and he said: I recited a Juz on my way. Al-Haafiz adh-Dhahabi (may Allah have mercy on him) said in his biography of al-Khateeb al-Baghdaadi: The khateeb used to walk with a Juz in his hand, which he would study.

For forty years, Ibn ‘Asaakir (may Allah have mercy on him) – as his son said – did not focus on anything except matters of knowledge, even during his free time or when he was alone. He always had with him books of knowledge and the Qur’an, which he would read and memorize. They were always keen to make the most of their time by doing more than one thing at the same time. If the pen became blunt and he needed to sharpen it, one of them would move his lips with remembrance of Allah while fixing his pen, or he would review things that he had memorized lest any time pass without him doing something useful.

Abu’l-Wafa’ ‘Ali ibn ‘Aqeel (may Allah have mercy on him) said:

I do not allow myself to waste even one hour of my life; even when I am not reading anything or reciting anything, I would think while I am resting of some issues of knowledge and I will not get up until I have come up with something I can write down.

Ibn al-Qayyim (may Allah have mercy on him) said: I know someone who fell sick with a headache and fever, and his book was beside his head. When he was awake he would read, and when he fell asleep he would put it down.

[The Etiquette of Seeking Knowledge]

With regard to making a schedule and organizing one’s time, that may be done as follows:

The program of the seeker of knowledge begins at dawn, which is the time for memorization of the Qur’an and ahadeeth. The best time for memorizing – especially the Qur’an – is the time just before dawn and after Fajr prayer, when the mind is clear and it is easier to memorize. So the seeker of knowledge prays in the mosque and remains there until sunrise or afterwards, memorizing and reviewing what he has memorized. When he has finished that, he begins to memorize texts of knowledge – the texts of ahadeeth, fiqh, usool and Arabic language.

If he has a job or is in school, he goes to it. Otherwise he spends the rest of the morning memorizing and revising until Zuhr, then he takes a siesta and rests a little.

As for the afternoon, it is for studying and reading, or studying with others, or discussion and reviewing issues of knowledge with others.

After Maghrib, he attends study circles and after ‘Isha’ he reviews what he has learnt or he may read a new book.

It should be noted that what we have mentioned here comes under the heading of organizing time in general terms. Each student should organize his time according to his circumstances, whether he is working or not, whether he is married or single, whether he devotes all his time to Islamic knowledge or he has some other preoccupations, and so on. What matters with regard to organizing time is that there should be some hours of the day and night in which he makes himself memorize and read. People tend to want to rest and like to be somewhat lazy, so he should train himself to work hard and be active, and he should make himself get used to being organized and adhere to doing acts of worship and obedience. Otherwise, he will have wasted his day and then he will have wasted his life.

2 thoughts on “How can a Seeker of Knowledge Organize His Time?”