According to Mufti Muhammad Shafi Usmani, this ayah is an extension of the previous brief ayah and also an assertion of the great merit of the month of Ramadan. 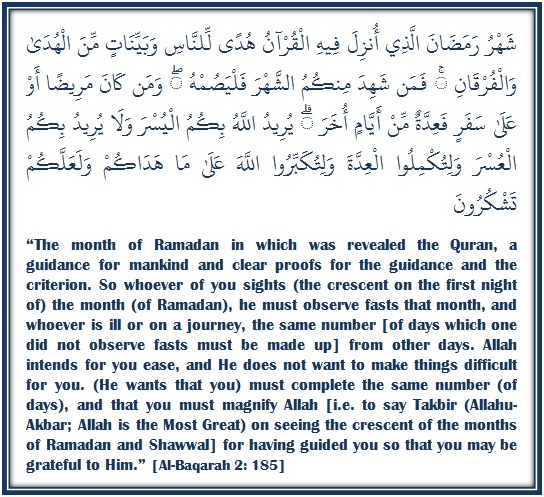 The word shahr [شَهْر] is the time between one hilal to the next hilal. Hilal is the first night’s moon.

Allah subhanahu wa ta’ala praised the month of Ramadan out of the other months by choosing it to send down the Qur’an, just as He did for all of the Divine Books. Imam Ahmad reported Wathilah ibn Al-Asqa’ radhiAllahu ‘anhu said that Allah’s Messenger salAllahu ‘alayhi wa sallam said,

Ramadan is the only month mentioned in the Qur’an. This is how virtuous it is. We have studied earlier that the word unzela means bringing something down from above. There are two opinions about this unzela. Ibn ‘Abbas radhiAllahu ‘anhu is of the opinion that it means that the entire Qur’an was brought down from Loh Mahfooz [Preserved Tablet] to Bayt Al-Izza [the first sky of this world] in one night of Ramadan. And from there the Qur’an was revealed in bits on the heart of Muhammad salAllahu ‘alayhi wa sallam during a period of twenty-three years. The other opinion is that it means that the entire Qur’an did not come down in one instance, but the revelation began in Ramadan. We find evidence for this in the Qur’an.

[How was the Divine Inspiration (Wahi) revealed?]

[Moms: Feed Your Soul this Ramadan]

Why was the Qur’an sent?

[What Benefits the Deceased After His Death?]

Allah subhanahu wa ta’ala says, “…a guidance for mankind and clear proofs for the guidance and the criterion…”  These are the three attributes of the Qur’an. It is:

Qur’an is guidance for the entire mankind. But we have read in ayah 2 of Al-Baqarah that it is guidance only for the Muttaqeen [the pious]. So, is there a contradiction? Absolutely not! Qur’an is a Book of guidance for all the humans. But who will be guided? There is a condition. Only the Muttaqeen – those who are the righteous will be guided. Who are they? They are those who approach the Book with humility, as a mean to seek guidance from it. On the contrary, it will not benefit those who approach the Qur’an with some other mindset such as finding faults in it, for arguments, for academic debates, to repress people, and so on. Therefore, before studying the Qur’an we must always check our intention and ask Allah subhanahu wa ta’ala to open up our hearts to understanding this Book, aameen.

[The Reward of Deeds Depends upon the Intention]

Secondly, Qur’an is bayyinah. It contains clear and unambiguous signs and unequivocal proof for those who understand them. These proofs testify to the truth of the Qur’an, its guidance, and how it guides to the straight path.

Thirdly, Qur’an is furqan. It is through the knowledge of the Qur’an that one can distinguish between the right and wrong, the truth and falsehood, and the permissible and the prohibited.

It tells us how important it is for us to get associated with the Qur’an; not the mere reading of the Book, but understanding it in depth. The Qur’an communicates to us our purpose in life, the path that we must take and the one that we must turn away from.  How carefully do we write our career objectives on our resumes and LinkedIn profiles? How conscious we are on the road so as to not miss our turn or violate a traffic rule? But how mindful are we about the laws of Allah subhanahu wa ta’ala? Many of us do not know our purpose in life and are living on the level of animals: wake up, go to work, eat, go to sleep, get married, have children and that is it. Is that all that Allah subhanahu wa ta’ala created us for? Is this our purpose to raise families and make money? Many of us do not know the prohibitions. We continue breaking His laws in ignorance or deliberately. We fear the policeman but do not fear Allah? May He guide us, aameen.

[Why Should I Study the Qur’an?]