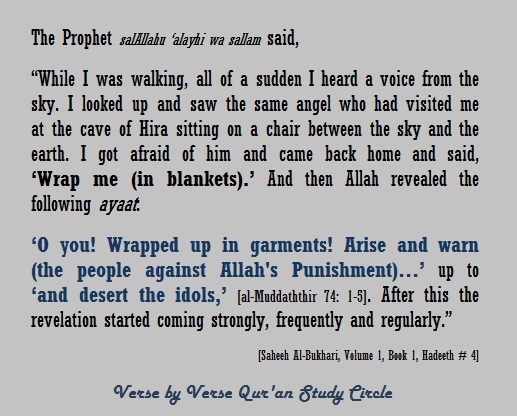 Narrated Jabir bin ‘Abdullah Al-Ansari while talking about the period of pause in revelation reporting the speech of the Prophet salAllahu ‘alayhi wa sallam,

“While I was walking, all of a sudden I heard a voice from the sky. I looked up and saw the same angel who had visited me at the cave of Hira sitting on a chair between the sky and the earth. I got afraid of him and came back home and said, ‘Wrap me (in blankets).’ And then Allah revealed the following ayaat:

‘O you! wrapped up in garments!’ Arise and warn (the people against Allah’s Punishment)…’ up to ‘and desert the idols,’ [al-Muddaththir 74: 1-5]. After this, the revelation started coming strongly, frequently and regularly.”

This hadeeth is related to the previous hadeeth (Number 3).

We also learn that when the first time revelation came to the Prophet salAllahu ‘alayhi wa sallam he returned home shuddering. He was frightened about his life. He thought he might be dying.

Then Allah subhanahu wa ta’ala gave a pause in the revelation allowing the Messenger salAllahu ‘alayhi wa sallam to recover and regain his strength.

The next time when he met Angel Jibreel ‘alayhi salaam in mid-air though he was afraid, he was not as terrified as the first meeting. It tells us that when one begins a new journey (such as starting a Qur’an or Hadeeth course), it is natural to be anxious. But with time and Allah’s help things become better. One should make an effort and keep showing up for class or the challenge that they have undertaken.

[Adapted from the talks of Sister Taimiyyah Zubair]

One thought on “Hadeeth # 4: The Period of Pause of Revelation”