From the Sunan of going to sleep is:

1.Say the supplication for going to sleep:

2. Recite the Mu’awwidhaat and wipe the body:

The Prophet salAllahu ‘alayhi wa sallam cupped his hands together and *Yanfuth in them and then read: Surah Al-Ikhlas, Surah Al-Falaq, and Surah An-Nas. And then he would wipe whatever he was able to of his body with his hands, beginning with the head and face and then the remaining parts of the body.

He would do this three times.

This is taken from the hadeeth:

Whoever reads them (i.e. the last two ayaat) at night they will be kafata for him.

From the benefits of reciting this, is that: Whoever reads it, for him there would remain a protection over him from Allah and Shaytan would not come close to him.

There are many supplications and athkaar that can be said at the time of going to sleep, such as:

5. In Saheeh Al-Bukhari and Muslim, it appears: 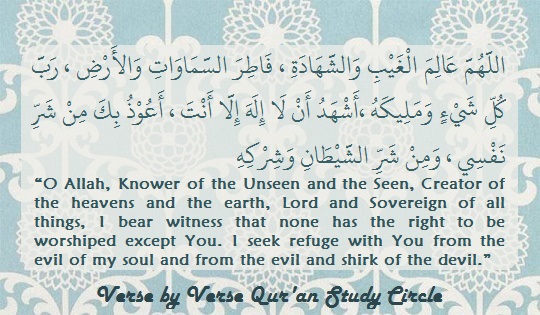 7. In Saheeh Al-Bukhari and Muslim, it appears:

[Whoever recites this du’a upon lying on their bed then if they die in their sleep, they will die upon the Fitrah meaning the religion of Islam – the way of Prophet Ibraheem ‘alayhi salaam]

4 thoughts on “[Sunnah Series] Before going to Sleep (Part 1)”