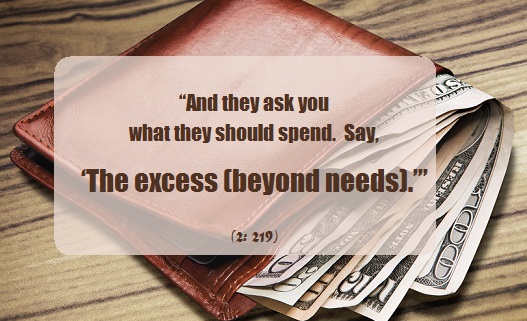 Allah subhanahu wa ta’ala says, “And they ask you what they should spend. Say, ‘The excess (beyond needs).’” Explaining this Ibn ‘Abbas radhiAllahu ‘anhu said that this means whatever you can spare above the needs of your family. “Needs” is the key word here. If we look at our lifestyle many of us are living an extravagant life. We have more food, more clothes, more furniture and gadgets than what we actually “need”.

“Spend it you on yourself.” He said, “I have another Dinar.” The Prophet salAllahu ‘alayhi wa sallam said:

“Spend it on your wife.” He said, “I have another Dinar.” The Prophet salAllahu ‘alayhi wa sallam said:

“Spend it on your offspring.” He said, “I have another Dinar.” The Prophet salAllahu ‘alayhi wa sallam said:

“You have better knowledge (meaning how and where to spend it in charity).”

[Where Should We Spend Our Money?]

“O son of Adam! If you spend whatever you can spare, it would be better for you; but if you keep it, it would be worse for you. You shall not be blamed for whatever is barely sufficient.”

Allah subhanahu wa ta’ala ends the address by saying, “Thus Allah makes clear to you ayaat (of revelation) that you might give thought.” It means that just as He stated and explained these commandments for us, He also explains the rest of His Ayaat regarding the commandments and His promises and warnings, so that we might give thought in this life and the Hereafter.

As mentioned in ayah 215, these two ayaat (215 and 219) are not about the obligatory charity [Zakah] because in it the amount is fixed and there is only a certain class of people that are entitled for it.

Another important point to remember is that sadaqah [voluntary charity] is not limited to material help only. It also includes giving someone an advice, your time, a kind word and even a polite smile.

Mufti Muhammad Shafi Usmani writes consideration should be given, while making voluntary charities. One should only spend what is extra to one’s personal needs so as not to make their dependents poor or deprive of their due rights.

Similarly, one who does not pay back his debt yet goes on squandering money in voluntary charities is not liked in the sight of Allah.

The Companions radhiAllahu ‘anhum despised holding back anything extra that was beyond their needs. The Prophet salAllahu ‘alayhi wa sallam had taught them that only that which a man sends forth (i.e. gives in charity) is his money. That which he leaves behind is his heirs. Therefore, a person should be more concerned about what he is sending forth than what he is leaving behind.

[Excellence of Simple Living and being Content with Little]

From this part of the ayah, we learn that one needs to bring a balance in his life. Neither should he be so covetous that he holds back charity and spends only on himself or his family nor should he be so callous that he gives everything away and later has to beg people. Remember that begging is not approved in Islam. One should work with his hands and ask only from Allah subhanahu wa ta’ala.

One should know how to live within his means without being extravagant or miser. One should look after the welfare of his community but not at the cost of his family or children.

It teaches us that we should also plan our charity meaning how and when we will give and what are we leaving for our family.