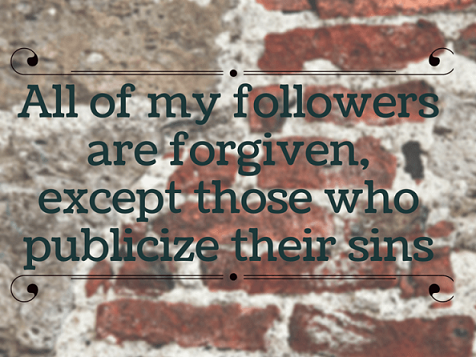 Ibn Qayyim (may Allah have mercy on him) mentioned:

So o my dear brother! Be cautious of both major and minor sins, likewise stay away from those deeds which sometimes mix up with minor sins which then move from the category of minor to major sins.

And among them some are these:

Regarding this the saying of Ibn Mas’oud radhiAllahu ‘anhu has past and Anas ibn Maalik radhiAllahu ‘anhu said regarding this, “You people do (bad) deeds (commit sins) which seem in your eyes as tiny (minute) than hair while we used to consider that destruction in the times of Rasoolullah salAllahu ‘alayhi wa sallam.”

We should not treat any sin small – sin is a sin whether it is major or minor. It leads to one’s destruction. It is the trait of a hypocrite that he sees his sins as small as a fly on his nose whereas a believer sees his sins as a mountain no matter how small they might be.

Sometimes when one hears of another’s Tawbah, they make fun of him that: “You are making Tawbah for this? This is such a small matter. Everyone indulges in such activities.” Distance away from such company. A Muslim does not follow the crowd but the Qur’an and Sunnah, whatever is displeasing in the Sight of Allah subhanahu wa ta’ala and is contrary to the Sunnah should not be a part of our lives.

3. Displaying Joy on Minor Sins and Being Happy on them

This thinking too is evidence of intense negligence, pleasure in disobedience, lack of knowledge regarding Allah’s Honor, ignorance of punishment of disobedience and their extreme danger. When negligence goes beyond the limits then it is necessary that it will take him to persistence which is being firm in opposition and determination to repeat the sin. This is another sin which might be even greater than the first sin. This is a punishment from the punishment of the sins that a sin greater than the actual sin is committed (Inna lillahi wa inna ilahi rajeoun).

There is nothing pleasing about committing a sin; one should not take pleasure in it. One such example is that deceiving a person, for example you sell them something for a much higher price than its worth, then you meet your circle of friends and share with pride how you deceived the other person. Is this something to be proud of? Since when deception became a trait of a Muslim? We too should be conscious and not sit in such companies where someone takes joy in their wrongdoing.

Sometimes people share how they cheat their spouse, and friends listen to such stories with interest. Is this something to take joy in? Does a dishonest person deserve our encouragement and support?

These are examples of sins that we do not consider sins. Let us look at our lives and see how many displeasing things we take interest in. What about movies and television dramas? Why do we take pleasure in what is wrong?

It is not from the Sunnah of Allah subhanahu wa ta’ala to hold us accountable for our sins right away. He gives us chances to reflect on our mistake and promise not to repeat it. This chance, however, is not a permission to indulge in sins. It should make us conscious and acknowledge the Being that we are disobeying.

So whoever committed a minor sin and Allah subhanahu wa ta’ala concealed it and the person reveals it, mentions it and talks about it, his minor sins increases many times. Because when he mentions his sin with pride and joy instead of remorse then in reality he is calling others to that sin even if they might be minor…

The Prophet salAllahu ‘alayhi wa sallam said, “All of my Ummah will be excused, except for the mujaahireen [those who make their sins known].  And verily it is a kind of mujaaharah [exposing one’s sins] that a man does something (sinful) at night, and then in the morning, when Allah has screened his sin for him, he says, ‘Hey So-and-So!  I did such-and-such last night…’  And the night passed with His Lord screening him, and he wakes up casting aside the screen of Allaah from himself.”

Many people are unaware of this. It is considered a matter of boldness and pride that how open a person is. People openly cheat others, consume alcohol, commit adultery and then share their stories with others. If you have slipped in your life, and Allah subhanahu wa ta’ala did not reveal your sin do not disclose it to people. Have some self-respect and conceal your wrong acts. This does not mean become a hypocrite and live dual lives. Rather, what it means is that do not encourage others to commit sins by sharing your stories of sins. Repent to Allah subhanahu wa ta’ala and conceal what you have done. Let this matter remain between you and your Creator.

6. The Committer of Minor Sin is that Scholar who is followed and His Piety is Known

If this person commits minor sins knowingly and persists in them then sometimes his minor are converted to major. But he who commits minor sins in anger, due to lack of knowledge or for other reason then his sin can be forgiven. The condition is that he has other good deeds which make him eligible for forgiveness.

Sometimes people follow us because of our good deeds, this means we need to be extra cautious. If people hold us to a higher pedestal then we need to hold ourselves accountable. Sometimes people commit sins out of ignorance and sometimes out of arrogance. We need to check our hearts and hold our nafs accountable for its deeds. Crowd follows the leader, if the teacher himself is involved in sin where will it lead to people? Look at your actions, what are you calling people toward?