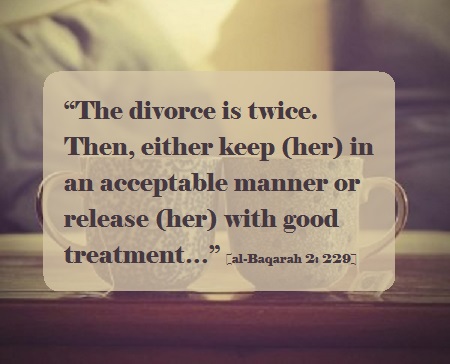 In the previous ayaat we studied about the procedure of Nikkah – Muslims are forbidden to marry those who practice Shirk. It was also said that in matters of marriage one must look at their prospective spouse’s religion and character and not just that which looks beautiful on the surface.

Our Deen provides clear guidance regarding marriage and divorce. It is a shame that Muslims have distanced themselves from the teachings of the Qur’an and Sunnah and practice “culture” instead. In Islam, no person is to be wronged. Likewise, no person should be favored only because they appear attractive or can present their case in an eloquent way. Islam teaches us to be just and honest in all our dealings and worry about the Hereafter as well and not just the fleeting joys of this world.

Before we study the ayaat, let us remember that two people who get divorced are not evil or have no regard for family values. Sometimes two people get married but things don’t work out between them. Sometimes your heart is constricted and you have no control over it. Recall your school days. Did you get along with everyone in the class? Didn’t you have preferences? There were some people with whom you instantly clicked and they became your best friends. And then there were those whose habits or manners did not please you, or your heart did not open up for them, and you preferred to keep them at a distance. Two individuals can be different and it is not something for which they should be rebuked. Yes, everyone is not perfect but marriage is not a one day thing where you endure a person for a couple of hours – it is a lifetime commitment. And if the house is void of an emotional bond and peace then it is better for the people to part their ways.

The word talaq [divorce] means to untie a knot whereas its counterpart nikkah means to tie a knot.

The Reason of Revelation of this Ayah

This ayah abrogated the previous practice in the beginning of Islam, when the man had the right to take back his divorced wife even if he had divorced her a hundred times, as long as she was still in her `Iddah [waiting period]. This situation was harmful for the wife, and this is why Allah subhanahu wa ta’ala made the divorce thrice, where the husband is allowed to take back his wife after the first and the second divorce (as long as she is still in her ‘Iddah). The divorce becomes irrevocable after the third divorce.

Ibn Abu Hatim reported that ‘Urwah said that a man said to his wife, “I will neither divorce you nor take you back.” She said, “How?” He said, “I will divorce you and when your term of `Iddah nears its end, I will take you back.” She went to Allah’s Messenger salAllahu ‘alayhi wa sallam and told him what happened, and Allah subhanahu wa ta’ala revealed:

“The divorce is twice.”

Ibn Jarir (At-Tabari) also reported this Hadith in his Tafsir.

After man has divorced his wife once or twice, then he has a choice to take her back as long as she is in her waiting period. However, as mentioned earlier, when he decides to reconcile then his intention should be to be kind to her and to mend their differences. Otherwise, await the end of her waiting period, when the divorce become final and let her go her own way in peace, without committing any harm or injustice against her. ‘Ali bin Abu Talhah reported that Ibn ‘Abbas radhiAllahu ‘anhu said, “When the man divorces his wife twice, let him fear Allah, regarding the third time. He should either keep her with him and treat her with kindness, or let her go her own way with kindness, without infringing upon any of her rights.”

“…either keep (her) in an acceptable manner or release (her) with good treatment,” acceptable manner is something that is accepted in the Deen as well as in the society. It is not an acceptable manner that you call the wife back and then there is a fight every other day. If you are not truly committed to the relationship then don’t play with the ayaat. Release her with good treatment means with “ehsaan”. If one feels that their relationship cannot work anymore then they should release the woman with “ehsaan.” But what happens in our societies? A woman is almost thrown out of her husband’s house; her children and belongings are held back and she is to leave with only the clothes that she’s wearing. She doesn’t only face bad treatment from her husband and in-laws, but when she reaches her parents’ house, sometimes the parents shut their doors at her face. Where will she go? Look at what Allah subhanahu wa ta’ala commands us; He uses the words ma’aroof and ehsaan, but how do we behave in such a situation? We telephone everyone and tell them what the other spouse or the other family has done to them. Where is haya in our lives?

[Haya is a Branch of Emaan]

The scholars explain ehsaan in divorce as not creating problems for the woman, not committing injustice, and parting with gifts.

The first lesson that we learn is that Muslims should not live their lives as cattle with no purpose or understanding. Gain knowledge about the correct method of getting married and getting divorced. You should know your responsibilities and your rights. Marriage is not for entertainment. It comes with great responsibilities. And if you are unable to honor the responsibilities then do not ruin your or someone else’s life. Learn your Deen and observe the commands of Allah subhanahu wa ta’ala.

For example, a husband divorces his wife in the year 2016 (he pronounced talaq only once). The woman completes her waiting period before the waiting period expires the man reconciles with her and they are again a couple. A few years later, he again divorces her. Now he has used his two chances. If he divorces the woman one more time then it will be the final divorce and she cannot return to her husband anymore. They will become non-Mahram for one another.

We also learn that if a person cannot get along with their partner, Allah subhanahu wa ta’ala does not tell them to suffer in that misery. The Loving God – provided a way out for His servants, so that they could live emotionally and mentally stable lives and not keep cursing themselves or their fates every day. It is a shame that we have no regard for the feelings of the victim and label them ungrateful or impatient. We all want pleasant lives for ourselves, but when it comes to someone else we want to see them in pain.

Remember that Allah subhanahu wa ta’ala did not say marriage is your punishment, stop complaining. Rather, He commanded us to part our ways as mature individuals with proper etiquette. 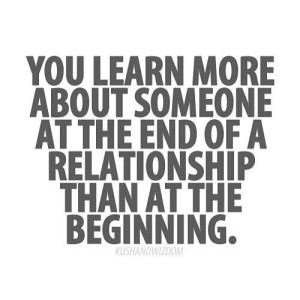 Why is it that when it comes to divorce in our society, the situation is often painful? It is because people do not follow the commands of Allah subhanahu wa ta’ala. Allah subhanahu wa ta’ala commands us to do ehsaan at the time of divorce. A husband has to do ehsaan even if he found her to be rebellious. Men are being commanded because sadly our society favors the men (not Islam – Islam gives women proper rights and a place of decency); they can wrestle through and get their rights but a woman cannot wrestle and take her rights. Therefore, men are being commanded if you are an honorable person as you wish to believe then have some manners at the time of divorce. Don’t let your divorce become the talk of the town.

No one asks for divorce in normal circumstances – it is only when someone is unhappy and in pain that they take this step. SubhanAllah, how at such an emotional time too Allah subhanahu wa ta’ala commands us to hold on to our Muslim manners! It teaches us that whether we are joyous or in pain we must always abide by the commands of Allah subhanahu wa ta’ala. We should not worry about what people are going to say but rather what my Lord expects from me. We should be seeking His pleasure in everything that we do.

4 thoughts on “Divorce is Thrice”