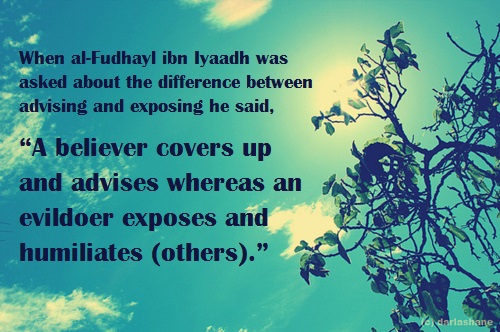 It is narrated from ‘Abdullah ibn Mas’oud radhiAllahu ‘anhu that one day he passed by the outskirts of Kuffah. There were some young men engaged in drinking alcohol and one of them named Zaadaan was singing songs. He was playing sarangi [an instrument of classical music] and singing songs in a melodious voice. When ‘Abdullah heard his voice he commented: How beautiful is this voice! I wish it was engaged in the recitation of the Qur’an. He said this and started walking away.

When Zaadaan heard this statement, he inquired about the commentator.

He was informed that he was the Companion of Rasoolullah, ‘Abdullah ibn Mas’oud radhiAllahu ‘anhu.

He asked: What did he say?

The people said: He was saying how beautiful this voice is, wish it was busy in the recitation of the Qur’an.

So, Zaadaan repented in the Court of Allah azzwa jal and adopted the company of ‘Abdullah ibn Mas’oud until he learned the Qur’an and gained immense knowledge about it and became an Imam [religious leader]. May Allah have mercy on him (aameen).

Such is the fruit of repentance and how effective ‘Abdullah’s advice was!

‘Abdullah ibn Mas’oud radhiAllahu ‘anhu teaches us the etiquette of calling people to Allah subhanahu wa ta’ala. He saw a few young men engaged in disobedience but he does not rebuke them. He expressed his aspiration for the young lad with beautiful voice and moved on. His etiquette won the heart of the person such that he immediately abandons his sin and immerses himself in the study of the Qur’an.

Why is it that when we are calling others to Allah subhanahu wa ta’ala, we begin with insults and taunts? When a person talks like this then who is going to listen to him?

[Correcting Others by “Advising” and not “Condemning”]

It teaches us that a person impresses more by his conduct than his statements. Unless you plow the field, you cannot grow crops in it. You have to soften the hearts of people before you expect them to listen to you. Zaadaan not only gave up the sin but also went on to become an Imam.

‘Abdullah ibn Mas’oud radhiAllahu ‘anhu did not only call him to the Right Path but also loved him. What happens when a celebrity or a singer reverts to Islam? We sit in wait for them to slip. We dig out incidences from their past to shame them. Sometimes, our conduct stops people from repenting. They are so fearful of taunts and mudslinging that they just keep doing what they are doing. Have we forgotten that Allah subhanahu wa ta’ala loves the repentant? If He guided His creation than who are we to shame them?

This incident also teaches us to look at our blessings, if we have been given a beautiful voice what are we doing with it? Singing songs, enticing opposite gender? How much are we engaged in thikr and recitation of the Qur’an than talking to people and other types of laghw?

One thought on “The Repentance of Zaadaan”