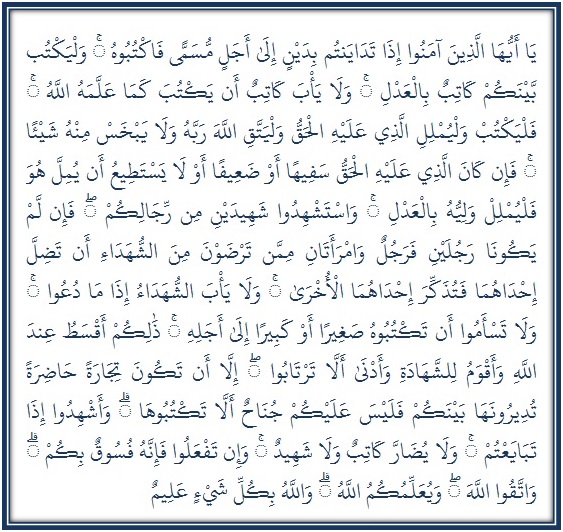 “O you who have believed, when you contract a debt for a specified term, write it down. And let a scribe write (it) between you in justice. Let no scribe refuse to write as Allah has taught him. So let him write and let the one who has the obligation dictate. And let him fear Allah, his Lord, and not leave anything out of it. But if the one who has the obligation is of limited understanding or weak or unable to dictate himself, then let his guardian dictate in justice.

And bring to witness two witnesses from among your men. And if there are not two men (available), then a man and two women from those whom you accept as witnesses – so that if one of the women errs, then the other can remind her. And let not the witnesses refuse when they are called upon.

And do not be (too) weary to write it, whether it is small or large, for its (specified) term. That is more just in the Sight of Allah and stronger as evidence and more likely to prevent doubt between you, except when it is an immediate transaction which you conduct among yourselves. For (then) there is no blame upon you if you do not write it. And take witnesses when you conclude a contract.

Let no scribe be harmed or any witness. For if you do so, indeed, it is (grave) disobedience in you. And fear Allah. And Allah teaches you. And Allah is Knowing of all things.” [Al-Baqarah 2: 282]

“But if the one who has the obligation is of limited understanding or weak or unable to dictate himself, then let his guardian dictate in justice.” In cases where the debtor is illiterate, deaf, mute, young or immature and does not have the capacity to decide on such matters then a guardian from his side will be appointed, who the debtor trusts, to act on the debtor’s behalf. The only condition is that wali [guardian/representative] himself is trustable.

The Rules of Witnessing

Allah subhanahu wa ta’ala says, “And bring to witness two witnesses from among your men,” to attend the dictation of contracts to further preserve its contents.

Up to this point the statement was limited to the writing or dictating of documents in transaction. Later on, it is enlarged by saying that the writing of the document should not be taken as sufficient. It should rather have witnesses as well so that, in case there is a dispute, the appearance of witnesses in the court could help resolve it. This is why the Muslim Jurists have said that simple writing of an agreement is not a conclusive proof in the sight of Islamic Shari’ah. Unless there is an oral evidence of witnesses, as approved by the Shari’ah, on the agreement, no decision could be taken on simple writing. Common courts of today also follow the same practice when they do not take a decision unless there is a verbal evidence to prove the document.

Number of Witnesses and their Qualifications

“And if there are not two men (available), then a man and two women from those whom you accept as witnesses – so that if one of the women errs, then the other can remind her.”

We draw some important rules from this part of the ayah:

[Why is the witness of two women considered to be equal to the testimony of one man?]

Allah subhanahu wa ta’ala says, “…And let not the witnesses refuse when they are called upon.” It means that signing a document as a witness is not enough but in case of dispute or otherwise when the witnesses are called they must appear. Therefore, it is important that the witnesses chosen for this task are mature individuals who understand their responsibilities. Mujahid and Abu Mijlaz said, “If you are called to be a witness, then you have the choice to agree. If you witnessed and were called to testify, then come forward.” It was reported that Ibn ‘Abbas radhiAllahu ‘anhu and Hasan Al-Basri said that the obligation includes both cases, agreeing to be a witness and testifying to what one witnessed.

-We learn that when somebody trusts us with their private matters and later if there is a dispute between them and another party and we are called for arbitration we should not stay at home. If we know about the matter then we must speak up and be honest.

-A person should remember to speak only when spoken to and not to speak incessantly. When a person talks a lot or answers questions that were not even asked such a person makes a lot of mistakes. It is a mistake that people often do in public hearings, interviews and even private conversations. We should adopt the etiquette of the early predecessors who practiced silence and when they spoke it was worth listening to.

-We also learn that people should only appear in courts when they are called and not jump into the scenes creating further fasad.

[Writing a debt and having it witnessed]

Allah subhanahu wa ta’ala commands that the debt be written whether the amount is large or small, “And do not be (too) weary to write it, whether it is small or large, for its (specified) term. That is more just in the Sight of Allah…”

Do not be discouraged against writing transactions and their terms whether the amount involved is large or small. Writing transactions that will be fulfilled later is more just in the Sight of Allah subhanahu wa ta’ala. It is also better and more convenient to preserve the terms of the contract. Therefore, recording such agreements helps the witnesses, when they see their handwriting – or signatures – later on and thus remember what they witnessed, for it is possible that the witnesses might forget what they witnessed. Writing down contracts helps repel any doubts. It can be referred to at a later date and the doubts will end.

We learn that all kinds of transactions that involve deferred payment must be recorded in writing. This is not done because we distrust the other person, rather it is to prevent any misunderstandings or doubts at a later stage.

Other transactions that involve cash payments do not require to be written down. This depends on the sellers and buyers whether they want to give or take receipt/invoice or not. Mufti Muhammad Shafi Usmani writes that as a precautionary measure, two witnesses should be taken to confirm the agreement anyway, just in case a dispute arises between the parties concerned. For instance, the seller may say that the price was not received, or the buyer may charge that he did not receive everything he bought. Evidence of witnesses will serve well in deciding this dispute.

The Scribe or Witness must not Suffer Any Harm

While the scribe has certain responsibilities, Allah subhanahu wa ta’ala also ensured his protection. He said, “Let no scribe be harmed or any witness. For if you do so, indeed it is (grave) disobedience in you.”  How can the scribe be harmed? He could be pressured into writing something that was not previously agreed. He could be called at inconvenient times hence affecting his business, employment or personal life. He could be threatened or given some other kind of mental torture. Whoever defies what he was commanded to do and commits what he was prohibited then it is because of the sin that resides in him.

Under its system of justice, Islam has forced the witnesses to appear in court, and has made the concealment of evidence a grave sin; but at the same time, the other side of the picture has also been duly taken care of, so that people are not made to stay away from testifying. It was the effect of this two-way precaution that truthful and selfless witnesses were available in every case, and cases were decided easily and quickly true to the demands of justice. When the modern world bypassed this Qur’anic principle, the whole court system went to pieces. Real and true witnesses in cases became virtually extinct. Everyone was compelled to shy away from appearing as a witness. The reason is simple. Being identified as a witness means trouble. If the case involves the police and a crime, the chief of the police station would call the witness every day and any time, and on occasions, would have him sit there for hours. Even in civil courts, the witness is treated as if he was the criminal. Then the dates of the case keep changing endlessly. New dates are given on which the poor witness is bound to come leaving his business, job and needs. If he fails, the threat of an arrest-warrant hangs over his head.

Therefore, every decent person engaged in earning his livelihood has been forced to take the appearance in court as punishment for no crime of his, and therefore, he has been left with no choice but to avoid it as far as he can. Professional witnesses are all you get and they make no distinction between the lie and the truth.

Allah subhanahu wa ta’ala after emphasizing these basic ingredients eliminates these malpractices by reminding us to fear Him and to live our lives as He taught us. To do what He commanded us to do and to refrain from what He prohibited. He is Ever-Watchful over us and has the perfect knowledge in all matters and in their benefits or repercussions. Nothing escapes His perfect watch, for His knowledge encompasses everything in existence.