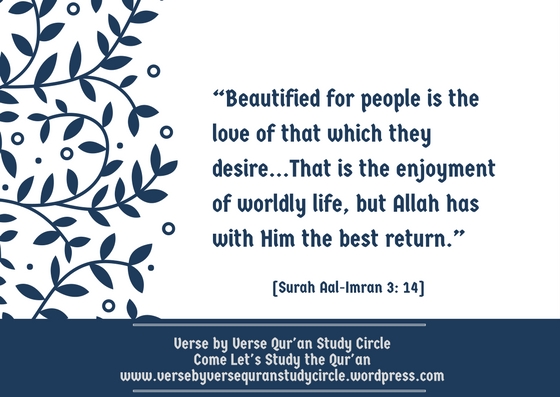 In the previous ayaat we studied about the hostility of the previous nations and their subsequent humiliation. Allah subhanahu wa ta’ala now explains the reason for this hostility – the love for this worldly life. The greed for wealth and power and the love for ancestral customs have made them negligent of the Hereafter. The blessings of this world are only temporal enjoyments; the real life is yet to begin.

The word zuyyina [زُيِّنَ] is from the root word Zay-ya-noon and it means “to adorn.” It means to beautify something, making something dear to one, etc. From the same root is the word Zeenat – beauty. Allah subhanahu wa ta’ala has beautified some things to test mankind. Shaytan beautifies our deeds, which is why many people fall in self-obsession as well as sins. Man keeps committing sins and Shaytan keeps assuring us that these are good.

The word shahawati [شَّهَوَاتِ] is from the root word sheen-ha-wau and it means “to desire something or to ardently incline toward something.”

Words qanatiri [قَنَاطِيرِ] and muqantarati [ْمُقَنطَرَةِ] are from the root word qaf-noon-Ta-ra which means “to have a heap of wealth, a large sum of money or treasures.”

The love for this temporary life is the source of all errors. Allah subhanahu wa ta’ala names some of the most desired things that have been made to look attractive so that people go after them enticed by their glamor having no concern for the life yet to come.

The things named here are the center of attraction for human beings, out of which, women come first and then the children. For whatever man goes about procuring is because of the needs of his family – the wife and children. Then come other forms of wealth and possessions – gold, silver, cattle and tillage – means for earning a living and competing with others.

[On the Day of Judgment, No Wealth or Children Shall Avail]

Why was a man created to be temperamentally attracted to these things?

The answer is that Allah subhanahu wa ta’ala has done so in His ultimate wisdom. Let us consider:

If a person was not naturally inclined to and even enamored with these things, where would the test be? No one would go to work, get married and have a family. People would be living in isolation having no concern with one another. But that is not how communities live and grow. Therefore, Allah subhanahu wa ta’ala placed the love of the delights of this world in our heart and in them lies our test. A person who has understood the reality of this life recognizes that these delights are only a test and a mean to fulfill one’s needs lawfully. One works to sustain himself. He gets married and has children because it is natural to have a family and loved ones. His work and family do not make him negligent of the Hereafter; his eyes are set on the “real life” of the Hereafter.

If a person was free from trials and temptations then Paradise would become meaningless for him.

Allah subhanahu wa ta’ala started with women because the test with them is more tempting. The Prophet salAllahu ‘alayhi wa sallam said,

“I did not leave behind me a test more tempting to men than women.”

This does not mean that the woman is an evil creature and an ally of Shaytan as some other religions and cultures purport because he also said,

“This life is a delight and the best of its delight is a righteous wife.”

Temptation has been placed in her to test mankind but when a man marries a righteous woman she becomes the means of his delight. So, we learn that instead of declaring women temptresses we should focus more on the tarbiyah [upbringing] and character. We should focus on their education and give them the best of both the worlds i.e. both religious and secular knowledge. If she is well-grounded in knowledge and a righteous person herself, she will not only look after the worldly needs of her family but also guard their religion. She will strive to excel in the path of Allah subhanahu wa ta’ala and teach the same to her children. She will encourage and support her husband, and ensure the entire family makes it to Jannah.

In another hadeeth, the Prophet salAllahu ‘alayhi wa sallam said,

“I was made to like women and perfume, and the comfort of my eye is the prayer.”

Here is where the balance lies. While it is natural to fall for the delights of this world and love them, one should not indulge in them so much that they neglect their prayers and other religious duties.

‘A’ishah radhiAllahu ‘anha said, “Nothing was more beloved to the Messenger of Allah salAllahu ‘alayhi wa sallam than women, except horses.” [In another narration, it appears, “…than horses except women.”]

Similarly, the desire to have children and love them is natural. One can have children to become their aide in the old age or make du’as for them after their death or they can have children for the purpose of pride and boasting. When a person gets involved in his/her children so much that he starts disobeying Allah subhanahu wa ta’ala, earns haram to increase one’s financial standing, a new mother becomes negligent of her prayers and religious duties, etc. then the same blessing becomes a test. Therefore, they are a temptation for mankind.

An extreme path will be to never get married, cut off from the world and live an isolated life. This is wrong. Muslims are encouraged to get married (to righteous people with good character) and have children. The Prophet salAllahu ‘alayhi wa sallam said,

“Marry the wadood [kind] and walood [fertile] woman, for I will compare your numbers to the rest of the nations on the Day of Resurrection.”

The desire of wealth sometimes results out of arrogance, and the desire to dominate the weak and control the poor and this conduct is prohibited. Sometimes, the “want” for more money is for the purpose of spending it on acts of worship, being kind to the family, the relatives, and spending on various acts of righteousness and obedience; this behavior is praised and encouraged in the religion.

The desire to have horses can be one of three types. Sometimes, owners of horses collect them to be used in the cause of Allah subhanahu wa ta’ala, and when warranted, they use their horses in battle. This type of owner shall be rewarded for this good action. Another type collects horses to boast, and out of enmity to the people of Islam, and this type earns a burden for his behavior. Another type collects horses to fulfill their needs and to collect their offspring, and they do not forget Allah’s right due on their horses. This is why in this case, these horses provide a shield of sufficiency for their owner.

Today, people do not commonly ride on horses but we have cars which are used for the same purpose. One can thank Allah subhanahu wa ta’ala and use his car to attend a Qur’an class or go to places to do da’wah work. The owner of this car will be rewarded because he is using his resource for a good cause. The second kind is where a person buys a new model and shows off to people. The car has no other purpose than to compete with one another and boast one’s standing. This is a despicable act. If Allah subhanahu wa ta’ala has given you a blessing then thank Him do not brag about it or hurt the deprived. The third kind is where the person mainly uses his car for personal needs such as going to work, grocery store, taking and collecting children from school, visiting relatives, etc. The car is a need for him due to long distances. He does not use it put others down.

We learn that having blessings and material wealth from Allah subhanahu wa ta’ala is not abhorrent, rather it is the use that makes it a Fitnah. If one thanks Allah subhanahu wa ta’ala and uses the blessings for his needs without neglecting his religious duties or putting others down then there is no issue. But when one becomes negligent of his obligation to the religion or uses the blessings to compete with others then it is wrong. He is committing a sin both by neglecting his duties and hurting others.

Therefore, when we are blessed we should ask Allah subhanahu wa ta’ala to allow us to use our resources in ways that please Him. We should ask Him to not let us indulge in the world so much that we forget the Hereafter. We should also not forget to thank Him lest the blessings are taken away. We seek Allah’s protection from being negligent toward our religious duties, from looking down on other people and expending our energies in futile matters, ameen.

4 thoughts on “The True Value of this Earthly Life”