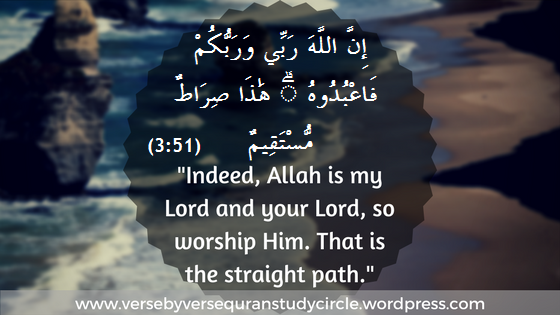 Allah subhanahu wa ta’ala continues to narrate to Mariam (AS) some of the character traits that her miraculous child will have. He will have the knowledge of the Book sent to Musa ‘alayhi salaam – the Torah, and also Injeel or Gospel – the Book that will be revealed to him. [When ‘Eesa ‘alayhi salaam will come to earth, he will also be given knowledge of the Qur’an. SubhanAllah!]

“And I cure the blind,” akmah is a person who was born blind. This was another miracle given to ‘Eesa ‘alayhi salaam. “and the leper, and I give life to the dead – by the permission of Allah,” he mentions that all his miracles were a special of favor of Allah subhanahu wa ta’ala. It was not possible to perform any of these had Allah subhanahu wa ta’ala not given him the permission to do so.

Many scholars stated that Allah subhanahu wa ta’ala sent every prophet (AS) with a miracle suitable to his time. For instance, in the time of Musa (AS), magic was the trade of the time, and magicians held a high position. Therefore, Allah subhanahu wa ta’ala sent Musa (AS) with a miracle that captured the eyes and bewildered every magician. When the magicians realized that Musa’s miracle came from the Almighty, Most Great, they embraced Islam and became pious believers. As for ‘Eesa, he was sent during a time when medicine and knowledge in physics were advancing. ‘Eesa brought them the types of miracles that could not be performed, except by one sent by Allah subhanahu wa ta’ala. How can any physician bring life to clay, cure blindness and leprosy and bring back to life those entrapped in the grave Muhammad salAllahu ‘alayhi wa sallam was sent during the time of eloquent people and proficient poets. He brought them a Book from Allah; if humans and the Jinn tried to imitate ten chapters, or even one chapter of it, they will utterly fail in this task, even if they tried to do it by collective cooperation. This is because the Qur’an is the Word of Allah and is nothing like that of the creatures.

‘Eesa’s (AS) statement, “And I inform you of what you eat and what you store in your houses,” means I can tell you about what one of you has just eaten and what he is keeping in his house for tomorrow. These are all miracles testifying to the truth of what he was sent with – and in them only they will believe who are the believers. “And [I have come] confirming what was before me of the Torah,” meaning affirming the Torah and upholding it. “And to make lawful for you some of what was forbidden to you,” Ibn Katheer comments that this part of the ayah indicates that ‘Eesa ‘alayhi salaam abrogated some of the Laws of the Torah and informed the Jews of the truth regarding some issues that they used to dispute about.

He goes on to say that he had brought a proof from their Lord containing affirmation and evidence to the truth of what he was conveying to them. So fear Allah and obey me. “Indeed, Allah is my Lord and your Lord, so worship Him. That is the straight path,” it clearly states that you and I are equal in our servitude, submission, and humbleness to Allah subhanahu wa ta’ala. And worshipping Allah Alone is the straight path.