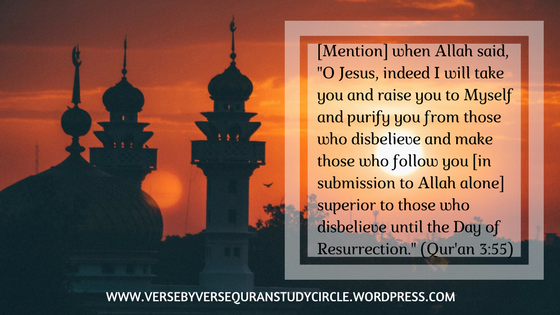 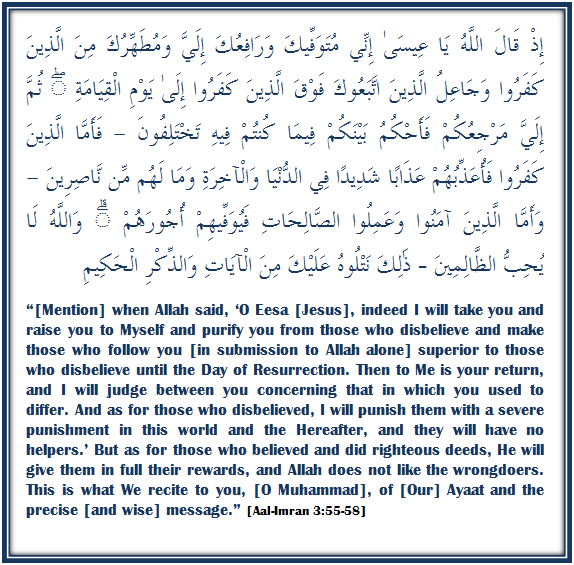 This is in continuation of the last ayah, where the incident of Prophet Eesa (AS) being risen to the heavens was mentioned.

Allah subhanahu wa ta’ala says, “O Eesa [Jesus], indeed I will take you and raise you to Myself.” The word mutawaffika [مُتَوَفِّيكَ] is from the root wau-fa-ya and it means “to take in full.” Mufti Muhammad Shafi Usmani (ra) explains in his tafseer Maarif-ul-Qur’an: Since man completes his appointed time at the hour of death and the spirit or soul given by Allah subhanahu wa ta’ala is taken back fully and conclusively, it is in that context that this word is also used figuratively in the sense of death. A simple form of death is the daily sleep of human beings.

Ibn Katheer comments that “I will take you and raise you to Myself,” means while you are asleep. This is similar to as Allah subhanahu wa ta’ala says in Surah Al-Anam,

The Messenger of Allah salAllahu ‘alayhi wa sallam used to recite the following words when he would wake up from sleep:

“All the thanks are due to Allah Who brought us back to life after He had caused us to die (sleep), and the Return is to Him.”

Quoting Ibn Taimiyyah (ra) from al-Jawab al-Sahih, Mufti Muhammad Shafi Usmani (ra) writes, “At-tawaffi, in the Arabic language means to exact fully or take in full. It takes three forms: the first is to take in sleep, the second is to take in death, and the third is to take the soul and the body all together.”

Mufti Shafi Usmani comments: The majority of the scholars have translated the word mutawaffika in the sense of “taking in full.” This means that Allah subhanahu wa ta’ala will not leave ‘Eesa (AS) in the hands of the Jews, rather He would take him away which would be in the form that he would be risen unto Him in the heavens.

“And [We cursed them] for their disbelief and their saying against Mariam [Mary] a great slander. And [for] their saying, ‘Indeed, we have killed the Messiah, Eesa [Jesus], the son of Mariam [Mary], the messenger of Allah.’ And they did not kill him, nor did they crucify him; but [another] was made to resemble him to them. And indeed, those who differ over it are in doubt about it. They have no knowledge of it except the following of assumption. And they did not kill him, for certain. Rather, Allah raised him to Himself. And ever is Allah Exalted in Might and Wise.” [Qur’an 4:156-158]

Ibn Katheer comments: This is what happened. When Allah subhanahu wa ta’ala raised ‘Eesa ‘alayhi salaam to heaven, his followers divided into sects and groups. Some of them believed in what Allah subhanahu wa ta’ala sent `Eesa as, a servant of Allah, His Messenger, and the son of His female-servant. However, some of them went to the extreme over ‘Eesa, believing that he was the son of Allah. Some of them said that ‘Eesa was Allah Himself, while others said that he was one of a Trinity.

Allah subhanahu wa ta’ala mentioned these false creeds in the Qur’an and refuted them. The Christians remained like this until the third century CE, when a Greek king called, Constantine, became a Christian for the purpose of destroying Christianity. Constantine was either a philosopher, or he was just plain ignorant. Constantine changed the religion of ‘Eesa ‘alayhi salaam by adding to it and deleting from it. He established the rituals of Christianity and the so-called Great Trust, which is in fact the Great Treachery. He also allowed them to eat the meat of swine, changed the direction of the prayer that ‘Eesa ‘alayhi salaam established to the east, built churches for him, and added ten days to the fast as compensation for a sin that he committed, as claimed.

So the religion of ‘Eesa ‘alayhi salaam became the religion of Constantine, who built more than 12,000 churches, temples and monasteries for the Christians as well as the city that bears his name, Constantinople (Istanbul). Throughout this time, the Christians had the upper hand and dominated the Jews. Allah subhanahu wa ta’ala aided them against the Jews because they used to be closer to the truth than the Jews.

When Allah subhanahu wa ta’ala sent Muhammad salAllahu ‘alayhi wa sallam, those who believed in him also believed in Allah, His Angels, Books and Messengers in the correct manner. They were the true followers of every prophet who came to earth. They believed in the unlettered Prophet salAllahu ‘alayhi wa sallam, the Final Messenger and the master of all mankind, who called them to believe in the truth in its entirety. This is why they had more right to every prophet than his own nation, especially those who claim to follow their prophet’s way and religion, yet change and alter his religion.

Allah subhanahu wa ta’ala abrogated all the laws that were sent down to the prophets with the Law He sent Muhammad salAllahu ‘alayhi wa sallam with, which consists of the true religion that shall never change or be altered until the commencement of the Last Hour.

Allah (SWT) is the Judge of the Matters

“Then to Me is your return, and I will judge between you concerning that in which you used to differ.” All matters will be decided on the Day of Judgment.

We, as Muslims, are required to believe in all the messengers and prophets of Allah subhanahu wa ta’ala. Disbelieving in even one messenger or prophet makes our emaan [faith] unacceptable.

“And as for those who disbelieved, I will punish them with a severe punishment in this world and the Hereafter,” the Jews were once a chosen nation but when they continued their disobedience to Allah subhanahu wa ta’ala and rejected ‘Eesa ‘alayhi salaam their downfall began. They were humiliated, persecuted, and expelled from their homes. They went wherever they could find refuge and that is how some of them settled in Madina waiting for the Final Messenger to come and save them.

When a person disobeys Allah subhanahu wa ta’ala, they are sometimes punished with a physical punishment and sometimes with an intangible punishment such as fear, anxiety, depression and restlessness.

“But as for those who believed and did righteous deeds, He will give them in full their rewards,” meaning in this life with victory and domination, and in the Hereafter with Paradise and high ranks. This is for those who “believe” and “do righteous deeds.” This is a necessary condition for our deeds to be accepted.

“This is what We recite to you, [O Muhammad], of [Our] Ayaat and the precise [and wise] message,” meaning the entire ayaat pertaining to Prophet ‘Eesa that we have read so far – this was all conveyed to him by Allah subhanahu wa ta’ala from the Al-Loh Al-Mahfooz [The Preserved Tablet].