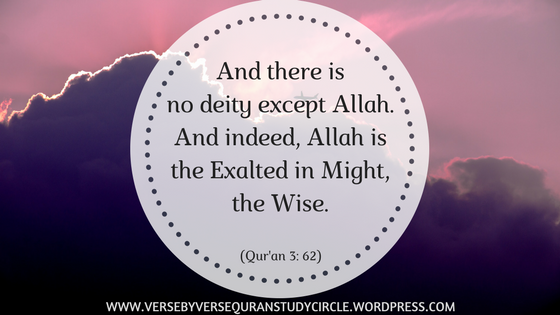 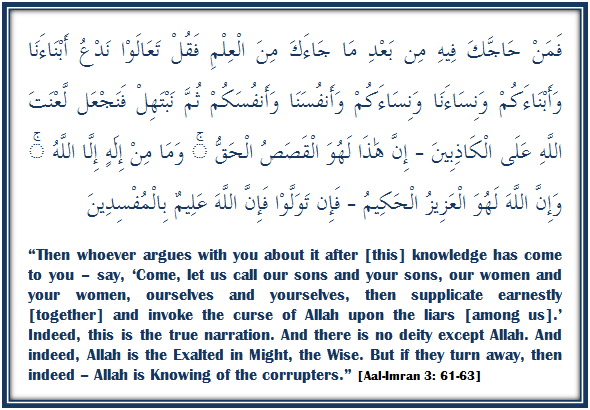 The reason for the revelation of these ayaat in Surah Aal-Imran from the beginning until here was that a delegation from the Christians of Najran (Yemen) came to Madina to argue about ‘Eesa ‘alayhi salaam. They claimed that he was divine and the son of Allah. Allah subhanahu wa ta’ala sent these ayaat from the beginning until here to refute their claims, as Imam Muhammad ibn Ishaq ibn Yasar and other scholars stated.

Mufti Muhammad Shafi Usmani (ra) writes in his tafseer, Ma’arif-ul-Qur’an: The Prophet salAllahu ‘alayhi wa sallam had sent a message to the Christians of Najran that included three options:

1.Accept Islam
2.Pay jizyah [a levy on free non-Muslims under the Muslim rule]
3.Get ready for a war

After mutual consultation, the Christians sent a delegation to the Prophet salAllahu ‘alayhi wa sallam consisting of Shurahbil ‘Abdullah ibn Shurahbil and Jabbar ibn Fayd. They came and began talking about religious issues. When they, in their effort to prove the divinity of Jesus, took their debate to the extremes of dispute that was when this ayah of Mubahalah was revealed.

The Prophet salAllahu ‘alayhi wa sallam invited the Christians to join in the Mubahalah confrontation (a form of resolving disputes by praying to Allah subhanahu wa ta’ala).

He was instructed by Allah subhanahu wa ta’ala to say, “Come, let us call our sons and your sons, our women and your women, ourselves and yourselves, then supplicate earnestly [together] and invoke the curse of Allah upon the liars [among us].”

Mubahalah means mutual prayer but in the terminology of Islamic Shari’ah it refers to a particular form of resolving religious disputes. When the argumentations from both sides fail to resolve a religious issue, the parties jointly pray to Allah subhanahu wa ta’ala to cast His curse on whichever of the two parties is false. The curse of Allah means, “moving away from the Divine mercy.” [May Allah subhanahu wa ta’ala never deprive us of His Rahman, ameen.] Moving away from the Divine mercy also means moving closer to the Divine wrath – so the meaning becomes, “Wrath be on the liar.” Whoever is the liar shall face the evil consequences where the truth will become evident before the disbelievers as well. Such an invocation is called, “Mubahalah.”

[Calling the Jews to invoke Allah to destroy the Unjust Party]

“The delegation of Christians from Najran came to the Messenger of Allah salAllahu ‘alayhi wa sallam. The delegation consisted of 60 equestrians including 14 of their chiefs who make decisions.

These men were Al-‘Aqib, also known as ‘Abdul-Masih, As-Sayyid, also known as Al-Ayham, Abu Harithah bin `Alqamah, of (the family of) Bakr bin Wa’il and Uways bin Al-Harith. They also included, Zayd, Qays, Yazid, Nabih, Khuwaylid, ‘Amr, Khalid, ‘Abdullah and Yuhannas. Three of these men were chiefs of this delegation, Al-‘Aqib, their leader and to whom they referred for advice and decision; As-Sayyid, their scholar and leader in journeys and social gatherings; and Abu Harithah bin ‘Alqamah, their patriarch, priest, and religious leader.

Abu Harithah was an Arab man from (the family of) Bakr bin Wa’il, but when he embraced Christianity, the Romans and their kings honored him and built churches for him (or in his honor). They also supported him financially and gave him servants, because they knew how firm his faith in their religion was.”

Abu Harithah knew the description of the Messenger of Allah salAllahu ‘alayhi wa sallam from what he read in earlier divine Books. However, his otherwise ignorance led him to insist on remaining a Christian, because he was honored and had a high position with the Christians.

Ibn Ishaq said, “Muhammad bin Ja’far bin Az-Zubayr said that, ‘The (Najran) delegation came to the Messenger of Allah in Al-Madinah, entered his Masjid wearing robes and garments after the Prophet salAllahu ‘alayhi wa sallam had prayed the ‘Asr prayer. They accompanied a caravan of camels led by Bani Al-Harith bin Ka’ab. The Companions of the Messenger of Allah who saw them said that they never saw a delegation like them after that… Then Abu Harithah bin `Alqamah and Al-`Aqib `Abdul-Masih or As-Sayyid Al-Ayham spoke to the Messenger of Allah salAllahu ‘alayhi wa sallam, and they were Christians like the king (Roman King). However, they disagreed about ‘Eesa; some of them said, ‘He is Allah,’ while some said, ‘He is the son of Allah,’ and some others said, ‘He is one of a trinity.’ Allah is far from what they attribute to Him.”

Indeed, these are the creeds of the Christians. They claim that ‘Eesa [Jesus] ‘alayhi salaam is God since he brought the dead back to life, healed blindness, leprosy, and various illnesses, told about matters of the future, created the shape of birds and blew life into them, bringing them to life. However, all these miracles occurred by Allah’s leave, so that ‘Eesa would be a sign from Allah for people.

[The Miracles of Prophet ‘Eesa (Jesus)]

The Consultation among the Delegates regarding the Mubahalah

The Prophet salAllahu ‘alayhi wa sallam called them to the Mubahalah. They said, ‘O Abu Al-Qasim! Let us think about this matter and get back to you with our decision to what we want to do.’ They left the Prophet salAllahu ‘alayhi wa sallam and conferred with Al-‘Aqib, to whom they referred to for advice. They said to him, ‘O ‘Abdul-Masih! What is your advice?’ He said, ‘By Allah, O Christian fellows! You know that Muhammad is a Messenger and that he brought you the final word regarding your fellow (‘Eesa/Jesus). You also know that no prophet conducted Mubahalah with any people, and the old persons among them remained safe and the young people grew up. Indeed, it will be the end of you if you do it. If you have already decided that you will remain in your religion and your creed regarding your fellow (‘Eesa/Jesus), then conduct a treaty with the man (Muhammad) and go back to your land.’

They came to the Prophet salAllahu ‘alayhi wa sallam and said, ‘O Abu Al-Qasim! We decided that we cannot do Mubahalah with you and that you remain on your religion, while we remain on our religion. However, send with us a man from your Companions whom you are pleased with to judge between us regarding our monetary disputes, for you are acceptable to us in this regard.’”

Al-Bukhari recorded that Hudhayfah said, “Al-‘Aqib and As-Sayyid, two leaders from Najran, came to the Messenger of Allah salAllahu ‘alayhi wa sallam seeking to invoke Allah for curses (against whoever is unjust among them), and one of them said to the other, ‘Let us not do that. By Allah, if he were truly a prophet and we invoke Allah for curses, we and our offspring shall never succeed afterwards.’ So they said, ‘We will give you what you asked and send a trusted man with us, just a trusted man.’

Allah subhanahu wa ta’ala says, “Indeed, this is the true narration,” meaning what He narrates to Muhammad salAllahu ‘alayhi wa sallam about ‘Eesa ‘alayhi salaam is the truth that cannot be avoided. “And there is no deity except Allah.”

We refuge with Allah subhanahu wa ta’ala from doubt, falsehood, and misguidance, ameen.