In ayah 110, we read that among the People of the Book there are those who believe. The ayaat under study provide a description of some of the traits of these believing people who later became Muslims and fulfilled the condition of enjoining good and forbidding evil while also having emaan. 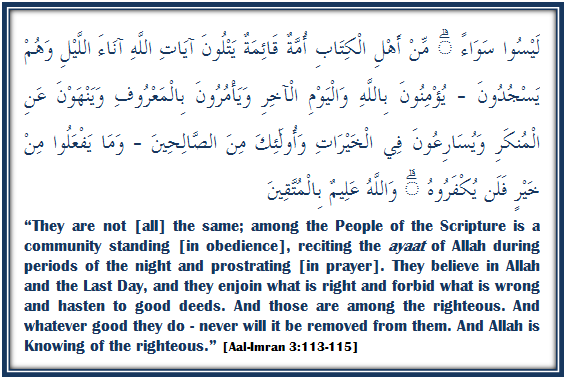 Among their qualities, we learn that they are night worshipers. Qiyaam al-Layl or the late night prayer is a distinguishing trait of those who truly love Allah subhanahu wa ta’ala, for no one will give up their sleep except out of love.

After praising those from among the People of the Book who had embraced Islam, Allah subhanahu wa ta’ala censures those who did not embrace and persisted in their disbelief.

In ayah 117, Allah subhanahu wa ta’ala gives a parable for what the disbelievers spend in this life.

The “wind of Sir” has been translated by the Mufasireen as “a frigid wind.” ‘Ata’ said that Sir means “cold and snow.” Ibn ‘Abbas and Mujahid are also reported to have said that Sir means “fire.” Ibn Katheer commented that the latter meaning does not contradict the meanings mentioned above because extreme cold weather, especially when accompanied by snow, burns plants and produce, and has the same effect fire has on such growth.

“…which strikes the harvest of a people who have wronged themselves and destroys it.”

This ayah mentions a calamity that strikes the produce that is ready to harvest, destroying it by burning and depriving its owner of it when he needs it the most. Such is the case with the disbelievers, for Allah subhanahu wa ta’ala destroys the rewards for their good deeds in this life, just as He destroyed the produce of the sinner because of his sins. Both types did not build their work on firm foundations which is the belief in Allah subhanahu wa ta’ala.

Allah subhanahu wa ta’ala did not wrong them but they wronged themselves because of their disbelief.

Mufti Muhammad Shafi Usmani writes in his Tafseer, Ma’arif-ul-Qur’an, ayah 117 declares through a similitude that disbelievers waste what they spend in this worldly life, for belief in Islam is a precondition for the acceptance of deeds in the Sight of Allah subhanahu wa ta’ala.

The similitude stresses the fact that the disbelievers inflict the injustice upon themselves when their good deeds go to waste in the Hereafter. Had they believed in Allah subhanahu wa ta’ala and embraced Islam, they would have been like other Muslims who, on suffering a worldly loss, are compensated by Allah subhanahu wa ta’ala through reward and forgiveness of sins, as reported in ahadeeth.

2 thoughts on “The Righteous Among the People of the Scripture”