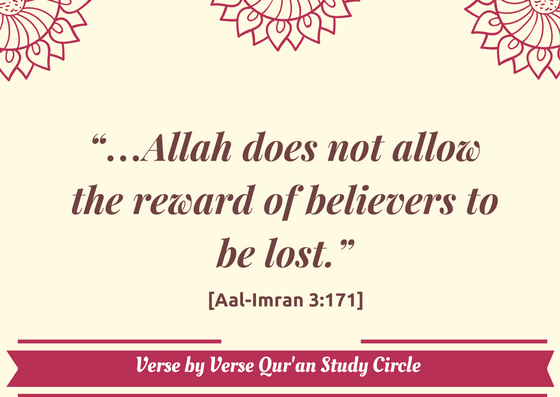 In the previous ayaat, we learned about the criticism of the hypocrites who said about the martyrs had they not gone out they would not have died. We learned that death is a pre-decreed matter. Whether a person goes out to strive in the path of Allah subhanahu wa ta’ala or remains sitting comfortably in his home, he will eventually die. No one can escape death.

In the present ayaat, Allah subhanahu wa ta’ala talks about the great virtues of dying in His path.

Allah subhanahu wa ta’ala states that even though the martyrs were killed in this life, their souls are alive and receiving provisions in the Dwelling of Everlasting Life.

In his Saheeh, Muslim recorded that Masruq said we asked ‘Abdullah about this ayah (And never think of those who have been killed in the cause of Allah as dead. Rather, they are alive with their Lord, receiving provision). He said, “We asked the Messenger of Allah salAllahu ‘alayhi wa sallam the same question and he said,

‘Their souls are inside green birds that have lamps, which are hanging below the Throne (of Allah), and they wander about in Paradise wherever they wish. Then they return to those lamps. Allah looks at them and says: Do you wish for anything? They say: What more could we wish for, while we go wherever we wish in Paradise? Allah asked them this question thrice, and when they realize that He will keep asking them until they give an answer, they say: O Lord! We wish that our souls be returned to our bodies so that we are killed in Your cause again. Allah knew that they did not have any other wish, so they were left.’”

“No soul that has a good standing with Allah and dies would wish to go back to the life of this world, except for the martyr. He would like to be returned to this life so that he could be martyred again, for he tastes the honor achieved from martyrdom.”

“When your brothers were killed in Uhud, Allah placed their souls inside green birds that tend to the rivers of Paradise and eat from its fruits. They then return to golden lamps hanging in the shade of the Throne. When they tasted the delight of their food, drink and dwelling, they said, ‘We wish that our brothers knew what Allah gave us so that they will not abandon Jihad or warfare.’ Allah said, ‘I will convey the news for you.’ Allah revealed these and the following ayaat,

“And never think of those who have been killed in the cause of Allah as dead. Rather, they are alive with their Lord, receiving provision.”

“The martyrs convene at the shore of a river close to the door of Paradise, in a green tent, where their provisions are brought to them from Paradise day and night.”

Ibn Katheer comments that it appears that the martyrs are of different types, some of them wander in Paradise, and some remain close to this river by the door of Paradise.

It is also possible that the river is where all the souls of the martyrs convene and where they are provided with their provision day and night, and Allah knows best.

Imam Ahmad narrated a hadeeth that contains good news for every believer that his soul will be wandering in Paradise, as well, eating from its fruits, enjoying its delights and happiness and tasting the honor that Allah subhanahu wa ta’ala has prepared in it for him. This hadeeth has a unique, authentic chain of narration that includes three of the Four Imams. Imam Ahmad narrated this hadeeth from Muhammad bin Idris Ash-Shafi`i who narrated it from Malik bin Anas Al-Asbuhi, from Az-Zuhri, from `Abdur-Rahman bin Ka`b bin Malik that his father said that the Messenger of Allah salAllahu ‘alayhi wa sallam said,

“The soul of the believer becomes a bird that feeds on the trees of Paradise, until Allah sends him back to his body when He resurrects him.”

This hadeeth states that the souls of the believers are in the shape of a bird in Paradise. As for the souls of martyrs, they are inside green birds, like the stars to the rest of the believing souls. We ask Allah the Most Generous that He makes us firm on the faith, ameen.

Rejoicing in what Allah has bestowed upon them of His bounty…”

It indicates that the martyrs who were killed in Allah’s cause are alive with Allah, delighted because of the bounty and happiness they are enjoying. They are also waiting for their brethren who will die in Allah’s cause after them, for they will be meeting them soon. These martyrs do not have fear about the future or sorrow for what they left behind. We ask Allah subhanahu wa ta’ala to grant us Paradise, ameen.

The Two Saheehs record from Anas radhiAllahu ‘anhu the story of the seventy Ansar Companions who were murdered at Bir Ma`unah in one night. In this hadeeth, Anas reported that the Prophet salAllahu ‘alayhi wa sallam used to supplicate to Allah in Qunoot in prayer against those who killed them. Anas said, “A part of the Qur’an was revealed about them, but was later abrogated, ‘Convey to our people that we met Allah and He was pleased with us and made us pleased.’”

“They receive good tidings of favor from Allah and bounty and [of the fact] that Allah does not allow the reward of believers to be lost.”

Muhammad ibn Ishaq commented they were delighted and pleased because of Allah’s promise that was fulfilled for them, and for the tremendous rewards they earned. ‘Abdur-Rahman bin Zayd bin Aslam said, “This ayah encompasses all the believers, martyrs and otherwise. Rarely does Allah mention a bounty and a reward that He granted to the prophets, without following that with what He has granted the believers after them.”